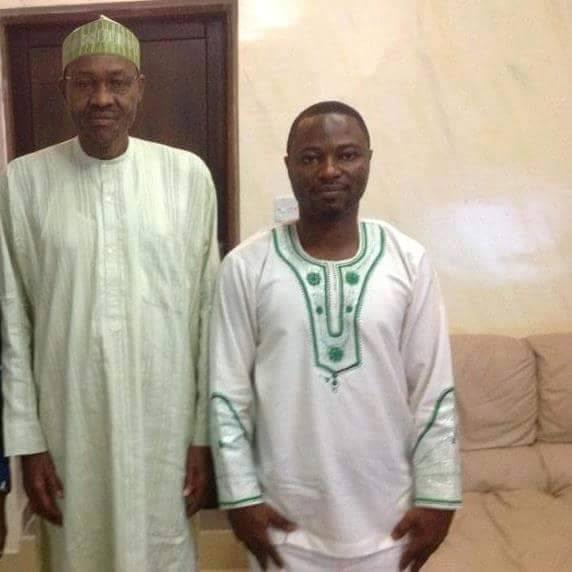 My Nigerian youth of the year award goes to Mr. Jasper Azuatalam. I have watched the evolution of this young man as a budding activist to a member of the Board of Trustees of the Nigerian political party, All Progressives Congress – APC. He is the President of Movement for Accountability and Good Governance (MAGG) and was the Chairman of “Buhari Vanguiard,” a support group for President Buhari during the 2015 Presidential elections in Nigeria.

I found out about his group during the “fuel subsidy” protest. I met this young man on social media and yes, he is truly younger than 35 years old. There are lots of fine young Nigerian activists/politicians doing great work for Nigeria. But I am particularly inspired by the work of this young man because of his sense of loyalty/conviction to the ideals he holds dear and I am sure he found those ideals embodied in the person of President Muhammadu Buhari.

He was friends with President Buhari and studied under the feet of Mr. President then commonly referred to as the “People’s General” ever since President Buhari lost his third consecutive attempt to be elected a democratic President.

He is a family man and never did I witness him disparage the decisions of his friend and mentor in public — though I witnessed him publish a post on social media where he reminded the President that his support base lies with the Nigerian masses. This brings me to another topic: Nigeria is mostly a society where pandering in politics has reached an ineffective height. Former president Jonathan failed as a leader partly due to poor preparation and bizzare “loyaltty” by some of his aides and associates: the former President fully realizes that now.

Another aspect I would like to highlight about my affection for this young man, Jasper Azuatalam, is the trajectory where his story originated from and is heading to. He is not of northern origin: He is Igbo. This idea promotes what President Buhari stated during his swearing-in ceremony. The president suggested, “I do not belong to anyone but belong to everyone.”

Mr. Azuatalam could have atempted to endear himself to any of the sitting political office holders in his region but he chose to support President Buhari because I believe he is convicted about the idea of a thriving Nigeria irrespective of religion, origin, tribe, etc.

I know some will be quick to point out that I desire political patronage from my peer in another continent because of this article, but I beg to disagree. Firstly, I can be impulsive and this article came strictly out of impulse, though I have long admired the courage of Mr. Azuatalam.

Secondly, I already have a political affiliation with President Obama. So my “political springboard” is intact, thirdly, I love to help others and have found politics as an effective way to reach my agenda in the long term so that is why we have worked hard on an issues dedicated nonprofit, Nigerians Saving Nigerians, since the last four years.

Fourthly, I believe any political patronage I will eventually get, if I get one, will be solely based on merit and the mercy of God upon my life.

Mr. Azuatalam, remain steadfast and enjoy the journey — your life was in danger during the administration of President Jonathan’s People’s Democratic Party (PDP) as someone that rallied the youth in the South-Eastern part of Nigeria when the Nigerian political party, All Progressives Congress (APC), was unpopular and treacherous to support.

Omololu Omotosho is the founder of Nigerians Saving Nigerians and a 2013 Fellow with President Obama’s policy organization, Organizing for Action.