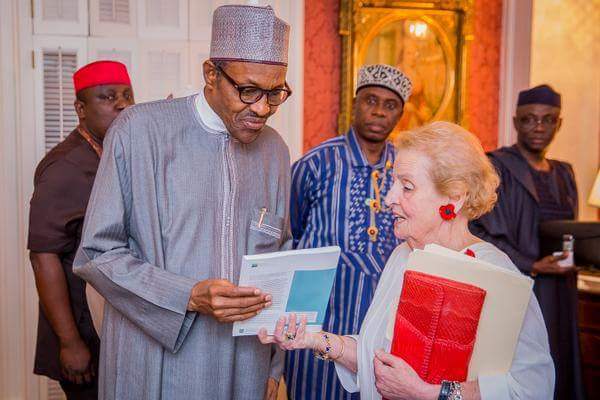 The Rivers State Chapter of the All Progressives Congress (APC) has felicitated with President Muhammadu Buhari and his entourage on their successful three days successful tour of the United States of America which ended with their return to the country this morning. Rivers APC said in a statement in Port Harcourt signed by the Chairman, Dr. Davies Ibiamu Ikanya, that the trip and President Buhari’s sterling performance during all his outings while in the United States have restored Nigeria’s pride in the comity of nations.

“The tour and the sparkling performance of President Muhammadu Buhari and his team while in the United States is yet another proof that Nigerians did not make any mistake in overwhelmingly voting him President in the March 28th presidential poll. For those of us from Rivers State, we are doubly happy and proud that Buhari’s great feats in the first two months of his administration vindicate our leader, Rt. Hon. Chibuike Amaechi, who correctly foresaw our great country’s political future and wholeheartedly mobilised us and the entire nation to support the candidature of President Buhari during the polls,” Rivers APC said.

The party showered President Buhari with praise for rejecting the immoral gay marriage proposal by US Congress, “thereby putting to shame our detractors who thought that Buhari is a weak President who can easily succumb to the great influence of the USA to act against the general interest of our nation.” “We are overwhelmed with joy that we at last have the President of our dreams and we are convinced that by the end of Buhari’s tenure Nigeria will be placed among the great nations of this world,” Rivers APC said.

The statement expressed strong support for President Buhari’s proposal to probe the Ministers of the immediate past Goodluck Jonathan administration “who were exporting our crude oil and pocketing millions of dollars into their private pockets.” “We wish to state that these wicked criminals should not only be prosecuted accordingly but that the National Assembly should also enact a law banning them from further participation in our political space as they never mean well for our nation. We should use the recommended ban on these evil elements to serve as a deterrent for any political leader who may be thinking in the same direction of liquidating the treasury of our nation,” the party said.

It explained that Rivers APC fought hard to sack the Jonathan administration because it knew that Dr. Jonathan and his team looters never have the interest of this nation at heart.

Rivers APC appealed to President Buhari to ensure that the Economic and Financial Crimes Commission (EFCC) sets in motion a machinery to implement the findings in the Ministry of Education where Chief Nyesom Wike as the then Minister of Education supervised the massive looting of both the UBE funds and other funds of the Ministry under the prompting of erstwhile first lady, Dame Patience Jonathan. “Anything less than ensuring the prosecution of this duo and their prohibition from further participation in the politics of Nigeria will not auger well for the future of our nascent democracy,” the party stated.
Long Live APC!