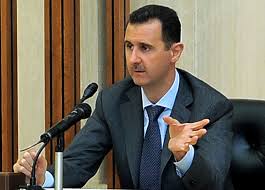 Russian President Vladimir Putin has stressed the significance of drafting a new constitution in Syria as a step toward a political resolution of the crisis in the Arab country.

“I believe it’s necessary to move toward constitutional reform. It’s a complicated process, of course,”  Putin said in an interview with the German newspaper Bild.

“And after that, on the basis of the new constitution, (Syria should) hold early presidential and parliamentary elections,” he said in the interview, parts of which were released by the Kremlin on Tuesday. Read full on Press