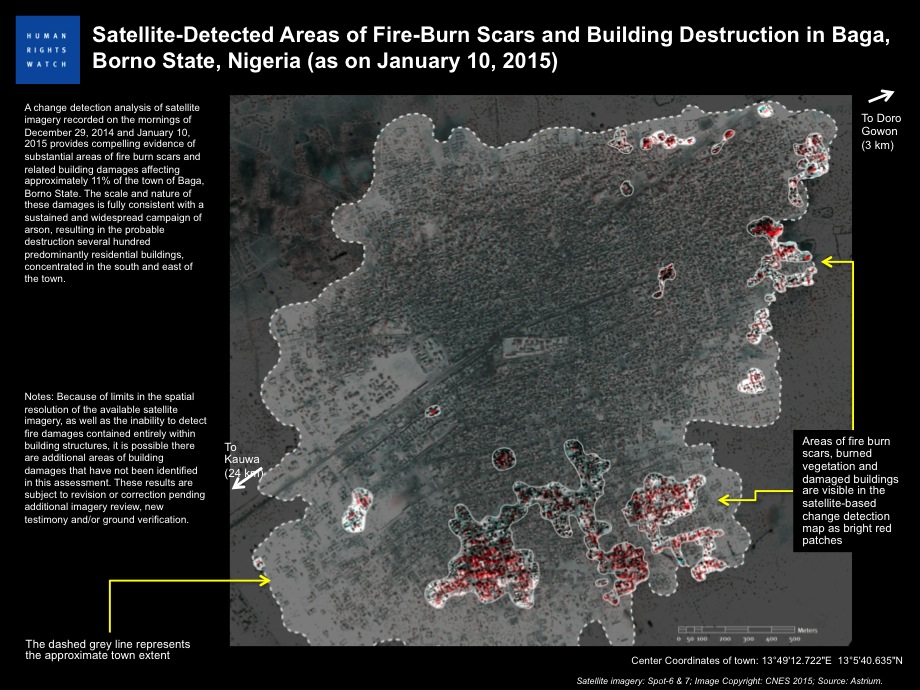 Since January 3, Boko Haram militants have attacked –almost on a daily basis –the area surrounding Baga, a fishing settlement on the shores of Lake Chad in Nigeria’s northeast Borno State.

The exact death toll in Baga and 16 surrounding villages is unknown, with estimates ranging from “dozens” to 2000 or more. “No one stayed back to count bodies,” one local resident told Human Rights Watch. “We were all running to get out of town ahead of Boko Haram fighters who have since taken over the area.”

Satellite imagery acquired by Human Rights Watch reveals evidence of large-scale destruction, particularly in the town of Doro Gowon, the site of the Multinational Joint Task Force (MNJTF) base, a few kilometers from Baga. Nigeria, Chad, and Niger established the MNJTF in 1998, initially to check criminal activities in the border areas between the three countries. The MNJTF expanded in 2012 to include Cameroon and Benin and cover counterterrorism operations against Boko Haram in the region. The satellite images, taken in the days following the attacks, provide direct evidence of extensive areas of fire-related damages to local buildings and trees, consistent with a systematic campaign of arson directed against the civilian population in the area, Although we don’t yet have an exact figure on the number of damaged and destroyed buildings, our analysis of the images permits us to conclude the following: Click to enlarge
The Nigerian military is fighting to retake Baga from Boko Haram, The extent of loss of life and damage to property, including from the current fighting, will become clearer when the battle is over.

This is not the first time that the Baga area has been attacked. Human Rights Watch reported that a Nigerian military raid in April 2013 resulted in the killing of local residents and the large-scale and deliberate destruction of property. The raid was in response to a Boko Haram assault that had killed a Nigerian soldier.

After the 2013 assault, we gathered information and analyzed satellite imagery, which conclusively showed that the soldiers destroyed a total of 2,275 buildings and severely damaged another 125. A preliminary report on the incident by the Nigeria National Human Rights Commission (NHRC), quoting a police report and witness accounts to NHRC staff, confirmed Human Rights Watch’s information and analysis.

In time, we hope to provide more accurate figures on the number of those killed in the attacks and information about them. But for now, credibly used satellite imagery is the closest we will get to the truth.