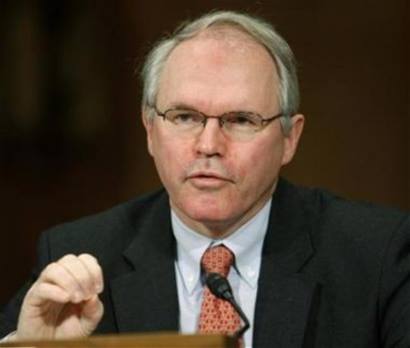 Revealed a former U.S. ambassador in Baghdad, Christopher Hill, said Saudi Arabia represents the biggest challenge and complex problem for the Iraqi politicians, and while stressing that it funded al-Qaeda attacks in Iraq, was quoted by intelligence sources, pointed out that the Saudis look to this country like a barrier controlled by “the year against spread Shiite Iranian political influence. ”

The newspaper Guardian group telegrams confidential letter sent Hill to the U.S. State Department, and seen “Alsumaria News”, it said, “Some believe that Saudi Arabia is seeking to enhance Sunni influence and weaken the control of the Shiite and the promotion of the government is weak and divided,” adding that “Saudi Arabia represents the biggest challenge and complex problem in relation to the Iraqi politicians who are trying to form a stable government. ”

He attributed the Hill in Brkieth reason for this is to “Saudi support, the fact that the hostile attitudes of the Shiites and concerns indicate that Iraq’s Shiite-led enhances the influence of Iran’s regional,” pointing out that “Iraqi officials accuse Saudi leadership to allow and periodically for imams and Khtabaúha poured their anger on the Shiites.”

Hill continued that “there are intelligence sources indicate to the Arabia Gulf effort to destabilize the Maliki government and the current funded al-Qaeda attacks in Iraq, and this was confirmed by the MP for the rule of law Haider al-Abadi, who said that the Gulf intend to destabilize Iraq.”

And Hill said that “in the wake of bombings last June areas of the Shiite majority in various parts of Iraq, Prime Minister Nuri al-Maliki publicly in this regard to one of the imams Saudis, he said that there many governments silent suspiciously on fatwas that incited the killing of Shiites,” pointing to “The Saudis look to Iraq like Sunni-dominated barrier against the spread of Shiite Iran’s political influence.”

Hill added that “the Iraqi parliament’s efforts focused on the weak Shiite government separate from its Arab neighbors, and strategically dependent on Iran,” adding that “the Advisor to the Prime Minister Sadiq al-Rikabi stressed that Saudi Arabia is opposed to a strong government under the leadership of the Iraqi National Alliance.”

Prime Minister Nuri al-Maliki face, on July 27, 2013, the Ministry of Foreign Affairs summoned a diplomat at the Iraqi Embassy in Riyadh for interrogation on charges of sectarianism.

The roots of the tension between Baghdad and Riyadh to the year of the Iraqi invasion of Kuwait and taken Riyadh was followed by a tough stance from the system at the time and became a base for the multinational forces gathered which consisted of more than 30 nations to liberate Kuwait.

In spite of attempts by Saddam’s regime to restore relations with Riyadh, which seemed more pronounced at the Beirut summit in 2002, the meeting of the Iraqi Vice President Izzat al-Duri with Saudi King Abdullah bin Abdul Aziz, who was then the crown prince, but the intention of the United States to attack Iraq and topple Saddam foiled any effort to re-establish the relationship between the two countries.

After the fall of Saddam Hussein’s regime in April 2003, did not witness relations any positive development but experienced tension almost continuously on charges of Riyadh for the Iraqi government sectarianism and accusations of Iraqi politicians Shiites to Saudi Arabia to support acts of violence in the country over the past years, and that does not work the opening of the Iraqi embassy in 2007 and the appointment of Ghanem Jumayli ambassador in Riyadh two years later, in restoring normal relations between the two countries. source