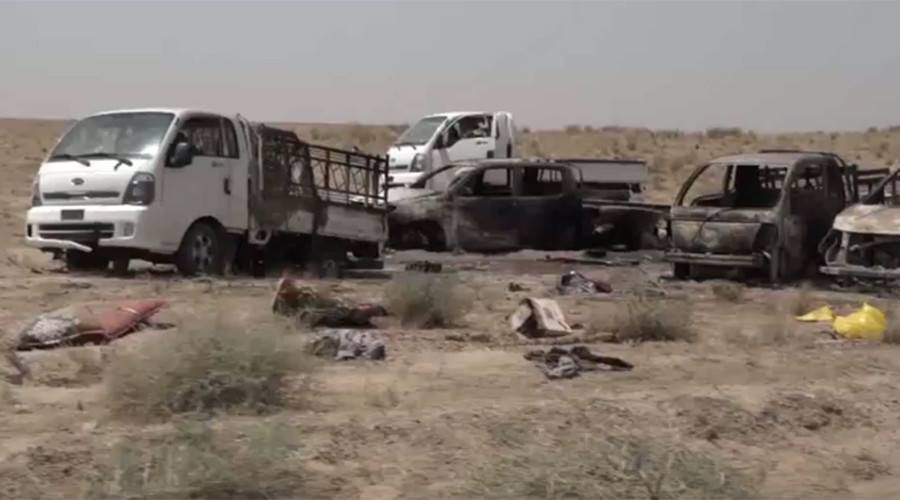 US defense officials claim at least 250 Islamic State fighters were killed and around 40 trucks destroyed in a series of US-led airstrikes near the Iraqi city of Fallujah, which was a key Islamist stronghold before being recently liberated by Iraqi forces.

US-led coalition aircraft hit about 40 vehicles in an Islamic State (IS, formerly ISIS/ISIL) convoy south of Fallujah on Wednesday, according to reports. US military officials told Reuters that the convoy was largely destroyed and at least 250 militants were killed.

The officials spoke on condition of anonymity, however, and warned that the preliminary estimate may change.

Combat footage that surfaced online shows dozens of completely gutted civilian trucks, minivans, and SUVs that were allegedly part of an Islamic State convoy. Some were apparently transporting heavy weapons or ammunition.

Fallujah, which is located some 60 kilometers from Baghdad, Iraq’s capital, had been under the control of Islamists since 2014. Top Iraqi officials declared full victory over IS in the city in mid-June after a nearly five-week offensive, but due to the back-and-forth nature of the struggle, urban fighting still continued for more than one week more.

Iraq finally declared Fallujah fully liberated last week after government troops entered the al-Julan neighborhood in the northwestern part of the city, which had been IS’ last remaining stronghold. Full on RT