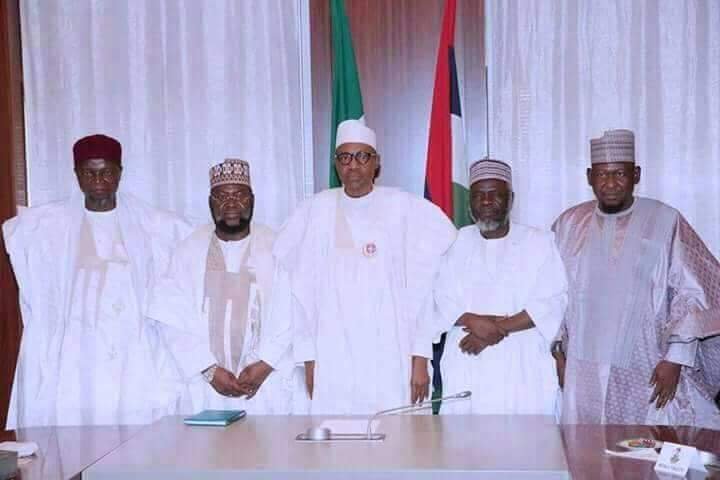 Some weeks ago, a group of Muslim Clerics of the Wahabi extraction visited the Police top Chief, The Inspector-General of Police and also the President of Nigeria, Muhammadu Buhari in their respective offices. The purpose or the necessity of both visits were largely not disclosed. But the question keen observers have been asking is; could that be the hidden link behind the latest savage crackdown on the members of the Islamic Movement?

The quartets of Abdullahi Bala Lau, Kabiru Haruna Gombe, Musa Hassan Katsina and Ibrahim Jalo Jalingo are all known avowed enemies of Shia, especially the Islamic Movement in Nigeria and Sheikh Zakzaky in particular. Their animosity towards the Sheikh and all that he stands for is legendary.

It is not clear at what point their romance with Buhari started, but undoubtedly it started before he became the President. He was spotted exchanging papers with the then candidate of APC, Buhari.

Even before the brutal massacre in December 2015, these clerics didn’t hide that they were opposed to the Movement in whatever way possible. They resorted to campaign of calumny against the Movement. The central theme of their preachings became more about talk against Shiah than talk about their own creed.

Undoubtedly, whatever was cooking, blosoomed after his victory. In a secretly recorded speech, a staunch member of their creed narrated howthey had a secret pact with President Buhari. He said they had met him when he was to go on an official visit to Iran, and warned him not to wear black while on the visit (whatever that means), because they, the Iranians< will use his picture and project that he was on of them. He said that, when he visited, Buhari kept his own side of the bargain by not adorning black. According to this cleric, there was a follow-up visit by the Wahabi clerics, in which Buhari had told them that he saw much worse things than they told him he would see. He reportedly told them that he saw that the Iranians were heretics! That they should wait a little while, they would see how he was going to deal with the Shiites in Nigeria. The scholar was excited therefore that Buhari had kept to the promise he made to them.

When the Zaria massacre took place, these clerics took turns in either outrightly supporting it or further instigating more violence against the Shiah.

Thus, when these visited the Ispector-General of Police and the President of Nigeria in the days leading to these fresh wave of attacks, it was obvious what was fresh in the agenda. It was only the signal, which was the visit of the President to Kaduna that was waited for, and the rounds of brutality against the Islamic Movement was restarted again.