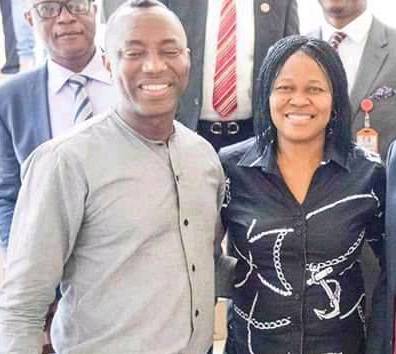 Human rights activist, Dr Joe Okei-Odumakin, and the  National Coordinator of Democracy Vanguard, Adeola Soetan, have condemned the arrest of Omoyele Sowore by men of the Department of State Services in the early hours of Saturday.

Sowore was arrested for leading the #RevolutionNow protest to challenge the government to make Nigeria a better place for the masses.

Okei-Odumakin, reacting to the arrest of Sowore, condemned the President Muhammadu Buhari-led administration for its continuous repression of critics of its government.

Odumakin told SaharaReporters that the arrest of Sowore showed “a fledging culture of intolerance that may be gripping the country.

“Except he has committed any other offence that we are not aware of, calling a protest cannot be a crime under any law to warrant anticipatory arrest as has been done.”

She urged the government to immediately order the DSS to release Sowore who she described as a prisoner of conscience for every minute he is held.

On his part, Soetan, who has been at the forefront of democracy in Nigeria since military era, described the arrest of Sowore as “an act of government terrorism against unarmed civilian.”
He urged the Nigerian government to recognize and respect the constitutionally guaranteed rights of Nigerians, including freedom of speech and right to hold peaceful protest.

He posited that  Sowore’s arrest would make free speech and protest impossible in the face of mass hunger, striking poverty, insecurity.

Soetan said, “The midnight arrest of Sowore by armed thugs of the Federal Government is stupid and condemnable. Protest is legitimate no matter its catchphrase, REVOLUTION NOW or mass protest.

“Those who foolishly justified the arrest should tell us which protest has been considered legitimate by government if not sponsored pro – government rallies alone.
“Did NLC call their protest a revolution before government / Ngige armed thugs assaulted them openly with intention to kill some of them?

“Arresting Sowore at night by the so – called armed DSS is an act of government terrorism against unarmed civilians.

“Actions like this that make free speech and protest impossible in the face of mass hunger, striking poverty, insecurity, unemployment and collapsed infrastructure in the midst of primitive accumulation of wealth by the privileged few make revolution inevitable. #FREESOWORENOW.”