NewsRescue- The National Association for Research and Therapy of Homosexuality (NARTH), which comprises of over 3000 health care professionals in America, including two ex presidents of the American Psychological Association and Head Of The Human Genome Project, Dr. Francis S. Collins who currently serves as Director of the National Institutes of Health in Bethesda, Maryland,  has come out with a new study describing that sex change is actually possible. The NARTH group are among few such controversial organizations in America that continue to offer ‘reorientation’ therapy to patients against an environment progressively hostile to their research and therapeutic opinions.

Related: NARTH- President Koocher Says the American Psychological Association Has No Disagreement With the Treatment of Unwanted Homosexual Attraction

Change in Sexual Orientation is Possible, Harm Unlikely, according to New Evidence of Long-Term Outcomes

(October, 2011) The best-designed study of sexual-orientation change efforts (SOCE) to date, has just concluded in a follow-up report that some people can indeed move from homosexuality to heterosexuality, and that harm is unlikely to result from such efforts.

The original study was published in 2007 by Stanton Jones, Ph.D., of Wheaton College, and Mark Yarhouse, Ph.D., of Regent University, in their book, “Ex-Gays?”. The follow-up study has just appeared in the Journal of Sex & Marital Therapy.

In the Journal of Sex & Marital Therapy, the authors conclude:

Evidence from the study suggested that change of homosexual orientation appears possible for some and that psychological distress did not increase on average as a result of the involvement in the change process” (Jones & Yarhouse, 2011, p. 404).

The authors followed 98 individuals (72 men and 26 women) who undertook SOCE through the assistance of a variety of  Christian ministries over a period of 6-7 years. The authors’ motivation for conducting this study was, in part, that the American Psychological Association had gone on the record indicating that change in sexual orientation was not possible, and that risks to those who engage in such efforts could be significant.

The authors note that the APA has moderated its viewpoint somewhat since then, fluctuating between statements that sexual-orientation change is “uncommon,” to the view that science “cannot yet” make conclusive statements about such change from the available literature.

The rigor of their own research standards, Jones and Yarhouse indicate, in fact meets many of the requirements that the APA itself has asserted are necessary in order to make reasonably definitive conclusions about the actuality of such change.

Participants in the Jones-Yarhouse study were first assessed at the beginning of their involvement in SOCE (from 1-3 years); again at 3 years, and again at the 6-7 year mark. Findings from the first two assessments were published earlier in the book, Ex-Gays? (2007).

Standardized and widely accepted measures of sexual orientation and psychological distress were administered at each assessment period. At the final time of assessment, attrition had reduced the available sample to 64%, which is not unusual for longitudinal studies.

The results after 6-7 years of SOCE involvement, presented below, indicate that change does indeed occur, although not for
everyone.

As regards harm, the study participants on average did not report experiencing harm due to SOCE during the course of their pursuit of change.  In fact, two of the indicators of psychological distress actually improved significantly over the time of the study. 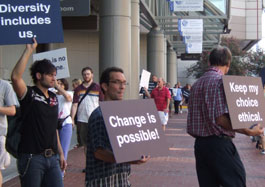 Jones and Yarhouse conclude that “the findings of this study appear to contradict the commonly expressed view that sexual orientation is not changeable” (p. 425).  and that attempts to change are not likely to be harmful.

While the authors believe their research clearly contradict the pessimism regarding SOCE that has been promulgated by the APA, they do acknowledge that their study has limitations.

Second, participants who had begun the change process prior to the start of the study appeared to have disproportionately positive outcomes compared to participants inducted into the study early in their pursuit of change.  This may indicate that some weeding-out of individuals who were not successful in changing sexual orientation occurred in the time between the onset of pursuit of change and the initial collection of data.  Although there is no way to know this for sure, Jones and Yarhouse imply that it is probably wise to view their study’s success rate for the change process undertaken in Christian ministries as a somewhat optimistic figure.

A third limitation is the relatively small sample size, which makes any generalization of these findings to the population of individuals pursuing SOCE tentative.  That said, the size of the sample is not uncommon in the longitudinal research that has been widely accepted as representative of samples in other subject domains.  Finally, the authors note that, given the study design, it was not possible to determine which components of the participants’ change process were responsible for the outcomes reported.

No doubt this study will be dismissed by skeptics who for ideological reasons remain dogmatically unwilling to acknowledge the reality of sexual orientation change in some people. However, Jones and Yarhouse’s study of SOCE should go a long way toward putting to rest two extreme positions:  i.e., that change always occurs and is simply a choice, or that change never occurs and is generally harmful.

It is also worth remembering that this study did not examine SOCE’s  that occur in the context of psychotherapy.  The subjects in this study received their counseling in Christian ministries. It is certainly within the realm of plausibility that the inclusion of professional psychological care, over and above participants’ involvement in Christian ministries, would increase positive outcomes.

The hallmark of a scientific organization that is not beholden to socio-political interests is a heightened curiosity at unexpected findings, and a subsequent dedication to understanding how such findings came to be.  In the case of change in sexual orientation, which had been purported to be impossible, this implies a dedication to study those individuals who report change in order to identify the active ingredients of change and thereby maximize its potential among SOCE consumers.

Unfortunately, however, the major mental-health associations appear to be moving further away from a purely scientific approach and toward one apparently directed by activists, whereby the purpose of their science does not seem to be understanding those who report change, but rather debunking, dismissing, and ignoring them.  Thus while Jones and Yarhouse will win no accolades or awards from the APA, they will have the satisfaction of knowing that their research exemplifies the best in scientific curiosity and courage.