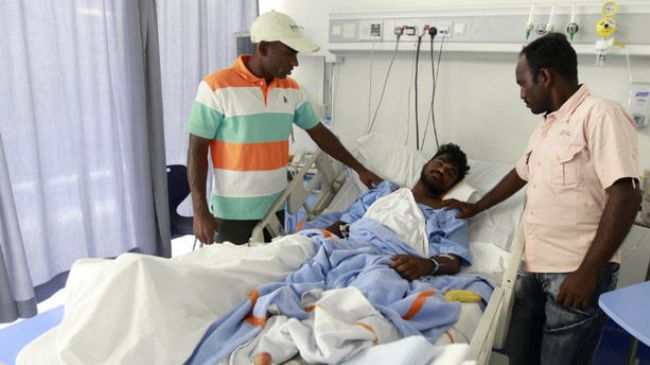 PressTv- The Indian fishermen who survived a deadly attack by a US Navy ship in the Persian Gulf say they received no warnings before a .50-caliber gun opened fire on their boat.

The incident occurred on Monday off the coast of the United Arab Emirates.

“We had no warning at all from the ship, we were speeding up to try and go around them and then suddenly we got fired at,” 28-year-old Muthu Muniraj told Reuters from a hospital in Dubai on Tuesday.

The Bahrain-based US Navy Fifth Fleet issued a statement on Monday saying that the USNS Rappahannock only attacked a small motor boat near the Dubai port of Jebel Ali, killing one and injuring three Indian fishermen, after they “ignored the warnings and came too close.”

The statement added that the US ship used a series of non-lethal, preplanned responses to warn the vessel’s operators to turn away from their “deliberate” approach before resorting to lethal force.

A spokesman of the US Navy Fifth Fleet, Lt. Greg Raelson, stated that an internal inquiry into the incident had not been completed and added that the fishing craft did not respond to the non-lethal measures taken by the US vessel. “That was when the security team fired rounds from the .50-caliber… Our ships have an inherent right to self-defense against lethal threats.”

“We know warning signs and sounds and there were none; it was very sudden. My friend was killed, he’s gone. I don’t understand what happened,” said Muniraj, whose legs were punctured by the rounds of the US ship’s .50-caliber gun.

Muthu Kannan, 35, said, “We were fishing and then on the way back they started shooting at us, so many shots, like a storm.” Kannan had a gunshot wound to the abdomen and a lower leg wired into place with metal rods.

“This is not the first time for us to go out in the boat and we all know what a warning is… All I can remember is a lot of shooting,” said 26-year-old Pandu Sanadhan.

Meanwhile, India has called for a full investigation.

Jebel Ali port, one of the largest ports in the Middle East, is the most frequently visited port by ships of the US Navy outside the United States.

Washington recently expanded its military presence in the Persian Gulf, sending an unspecified number of F-22 stealth fighters and warships to the region.