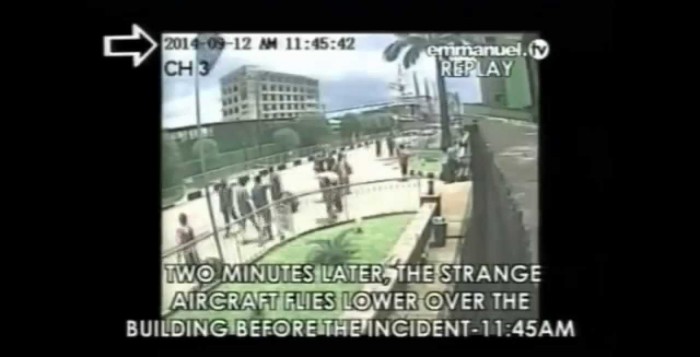 On Sunday 14th April 2014, Prophet T.B. Joshua played to his congregation and Emmanuel TV viewers worldwide shocking footage captured by security cameras of the horrific moment a guest-house collapsed within the church premises.

Joshua, speaking to a packed auditorium of worshippers seemingly undeterred by the tragic incident that transpired days earlier, began by thanking officials involved in the extensive rescue operation, as well as supporters worldwide for their prayers.

He then recounted the events that preceded the building collapse at exactly 12:44pm on Friday afternoon. “I know this is not the right time to talk,” the cleric started. “I will just say a little because I don’t want to interfere with the job of security personnel.”

Joshua narrated how on Friday morning at approximately 8am, he left the ‘prayer mountain’ where he ‘lives’ to return to the church, only to be alerted by phone that “there was a jet hovering, moving around at very close range at the mountain which I had just left.”

Shortly afterwards, he was informed the plane in question was flying dangerously low over a particular building within the church premises. “We are going to show you the video,” he then announced.

Church members reacted with gasps of shock and disbelief as a video containing security footage of the ‘strange airplane’ and its multiple flights was shown, followed by the building collapse in less than three seconds of horror.

Joshua went on to state that after thirty years residing in Ikotun, Lagos, he had never witnessed an incident of this nature. “This is to tell you we have a stable terrain in this area. I have been in this community for the past 30 years and no building has collapsed,” he insisted.

He went on to assure congregants that no effort was being spared in rescuing the victims of the tragedy. “As a minister of the Gospel, our first priority is life – life saving,” he stated. “There is no compromise in what we do at all. I am going to leave this for you to judge.”

He then released a warning that another similar incident would occur within the country if proper precautions were not observed. “Let us believe, educate our people and be alert. Why? So that our country will not witness a similar incident in another place.”

Seeming to speak the minds of congregants, Joshua went on, “I know you will ask me – why Synagogue? Don’t forget the spiritual blessing that God has bestowed on us? A big head wears a large hat.”

He proceeded to decry the attitude people had exhibited towards a much-publicised confession of an alleged Boko Haram member in The SCOAN in March 2014. “No matter how long a lie is sustained, truth will someday prevail,” the cleric admonished. “We should remember the militant that came with his group to this church with a bomb. Upon televising it, they said it was a lie – but later discovered it to be true. The case is still with the security.”

He added that the multiple rumours peddled about Ebola victims dying at The SCOAN and the alleged ‘salt-water’ cure ascribed to him that went viral were all attacks against the church. “They were trying to scare you from coming to this church. Don’t be scared – you are not the target, I am the target.”

Joshua stated however that his ‘job’ on earth was still unfinished. “I knew my hour had not yet come. I have not yet finished my job.”

He reminded congregants of a message he had given several weeks earlier that the last few months of 2014, which he had already termed ‘The Year Of Crossing The Bridge’, would contain tragic and calamitous events as if ‘it were 10 years’. He declared that in the midst of the unfortunate incident, “God is on top of the matter”.

Joshua then stated that Divine judgement would befall the perpetrators of the attack. “I want to assure you that our God will get back to them – the agents of satan,” he authoritatively declared.

Joshua went on to shock congregants the more by reading out a message he had received concerning another foiled Boko Haram plot against The SCOAN. “Man of God, my name is Emmanuel,” the message stated. “I have a confession to make. I want to give my life to Jesus Christ. I am a Boko Haram member. I came to SCOAN to plant a bomb but could not do it because of the God who called you. I went back to Jos with the bomb which I still have with me now.”

“The reason I am showing you this is for you to know the God you are serving,” Joshua explained. “God wants to reveal to you what He has been doing that you don’t know about,” he continued, adding that he knows ‘faithless’ attendees may likely stop visiting his church.

Joshua concluded by saluting the ‘martyrs’ who lost their lives in the tragic incident, describing them as people of faith who ‘knew the God they are serving’.

He insisted that truth would prevail amidst the conflicting reports arising concerning the cause of the building’s collapse. “Right from the beginning of my life, people have been lying but they still come back to the truth. That is a good life – for people to lie against you first before they realise the truth. Here I am – I leave it for you to judge. I am a prophet. The security have a job to do.”