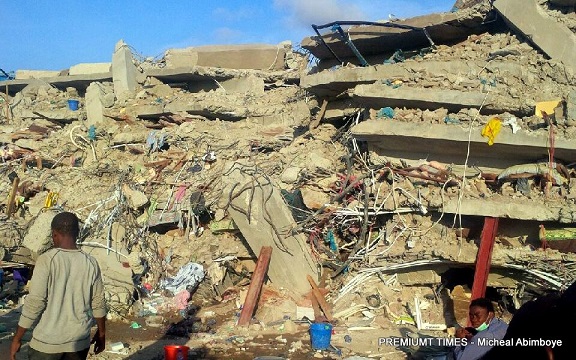 The Founder and General Overseer of The Synagogue Church of All Nations, Temitope Joshua, has linked the collapse of an uncompleted Guest House owned by his church to a “strange aircraft” which he said hovered around the building before its collapse.

Mr. Joshua said the plane hovered around the collapsed building for over 30 minutes.

The clergyman spoke just as emergency officials told this newspaper that 17 people died in the incident while 123 others were evacuated alive and rushed to hospital.

Briefing journalists on the incident on Saturday, the pastor played a CCTV footage of a flying aircraft to back his claim.

In his speech, Mr. Joshua insisted the aircraft, which flew past almost an hour before the incident, was responsible for the collapse of the building.

The pastor said he was the target of the attack.

“Members cannot be the target, the easier way to stop this church is to get the head and from my explanation, you know the truth,” he added.

Mr. Joshua called on security agents to study the CCTV footage as they investigate the incident.

He promised to speak further on the incident during service on Sunday.

“Service will hold tomorrow and I will state my position tomorrow in service, you can watch it live on Emmanuel TV,” he said.

He also apologised ?to the press following the hostile treatment of journalists by members of his church.

“We are very sorry on their behalf,” he said. “Our members are not hostile. The Bible is our standard. Even the Bible today, without the press, it cannot be accessible to many. Our members have respect for the press. When we fight the press, we are fighting Emmanuel TV. They value you people.”