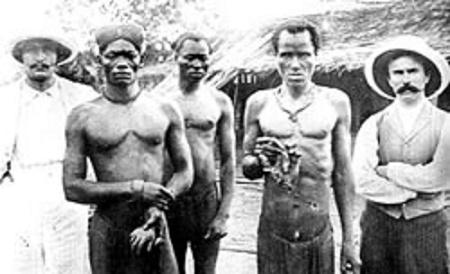 NewsRescue recently published an article on the Pope’s recent comments, calling the European Hitler’s Holocaust of European Jews, an unprecedented event in history.

Our editorial team, discussed how such a statement by the Pope of the world was either- intentionally markedly mis-informative,  markedly dishonest or markedly ignorant. Everyone interested in the not too distant history knows of the then Belgian King, Leopold II and as written in a very famous book- ‘King Leopold’s Ghost’, his role in formalizing the colonization and so-called ‘civilization’ of Africa, and in his quest to build Belgium, his abuse of Congo in the heart of Africa. Atrocities that are some of the most vile and wicked in human history, resulting in a holocaust of at least 25-30 million central African deaths, and permanent mutilation and psychological damage to the 2-5 Million who remained.

Now, the sad recurrence during Obama’s recent amend making trip to and speech in Cairo, Egypt, – his referring to the Jewish holocaust as ‘unprecedented’ [Speech text and video], brought about the need for us to re-post this article and inform Mr president, that the Jewish holocaust is Not unprecedented, and that if Africans are humans too, then it was actually surpassed in the not too distant past, in an event that remains a deep scar for all humanity, as the royalty that carried out this atrocity are still celebrated. And worse yet, mere recognition of its occurrence and resolution is not even ever considered.

To the President, the Pope and all others who don’t know and really need to know;- we believe that for you to appreciate that the Holocaust of Africa’s Congo and the slave trade Holocaust in itself supersedes the Jewish ~6 Million Holocaust, we must prove to you that Africans are human beings… and were human beings when leopold took Congo as his personal property and robbed and marauded the nation to build Belgium.

We hereby submit evidence of Homosapien-ism, and even undeniable evidence of advanced development and civilization of the Congo people.

Indeed the ancient, pre-colonial Africans had many different written scripts, and this is ultimate evidence of advanced civilization. They were human after all, and the 30 Million holocaust by Belgian King Leopold was committed against humans and is larger precedent to Hitler’s holocaust. And Leopold’s three-day burning of all the Belgian records, does not take away from this globally acknowledged horrific, historical unprecedented African catastrophe. Please do not make it worse…and do not be a Holocaust denier!

NewsRescue article on the Pope and his selective amnesia of a greater Africa Holocaust:

prayers and wails in regard to the tale of the Jewish Holocaust, in which accounts put the dead toll between 6-8 million. His first rejection of this event was one not too hard to forget, shortly after he entered office when he was reported to have asked God why He sat still and did nothing and allowed such event occur. His words at Auschuwitz in 2006- “Why, Lord did you remain silent?..” [2] But the question is- does the Pope forget Africa? Are the Holocausts of Africa [3] of the past and present not of importance to the Pope of the world? Or is European-Jewish life more sacred than African life, which includes Jewish blood (Ethiopian, Nigerian, Egyptian and other Jews[4]) and blood of all races of humanity?

Are the occurrence of the African Holocausts, the colonization of Africa and the Slave deportations too distant for the Pope and larger world to remember… or of too little magnitude in comparison? Then King Leopold of Belgium murdered up to 30 million Congolese when he raped Congo in Africa to exploit a great Nation to build his Nation. The population was cut down in his reign from 1885 to 1908 from over 30 million to less than 5 million, those left were women and children with their hands amputated. [5] The history is all too vivid in our memories of their using hands of Congolese as trophies in their quest to ravage the rubber resource of Congo, or is it not? Indeed, contrary to what the Pope said at Auschuwitz, the European-Jewish Holocaust was well precedented and surpassed by the African Holocaust, of cataclysmic proportion. And monuments of the atrocious Leopold are proudly displayed all over Belgium, to continue commemorating the pain, and endorsing the reality of the indignation and un-repentance. Statues that should be smashed into a thousand pieces.

“…The baskets of severed hands, set down at the feet of the European post commanders, became the symbol of the Congo Free State. , The collection of hands became an end in itself. Force Publique soldiers brought them to the stations in place of rubber; they even went out to harvest them instead of rubber, They became a sort of currency. They came to be used to make up for shortfalls in rubber quotas, to replace, the people who were demanded for the forced labor gangs; and the Force Publique soldiers were paid their bonuses on the basis of how many hands they collected…”[6] Or is it because of the European-Jewish account of gas-chambers and being burned? Then when we look at the entire African continent, and how between 100-300 million Africans were deported and killed en route their destination in the 300 plus year ‘Code Noir’ authorized, Trans-Atlantic slave deportation [7] And we remember stories of incendiraism, as narrated below occurring in Nigeria and all over Africa, in the account given by Captain Lord Esme Gordon Lenox,- ‘With The West African Frontier Force’ in the ‘Bequest of Edwin Conat‘, from the Harvard library.[8]

“…Towards evening a timid looking native turned up in a canoe and informed us that he was the chief of the town. We asked where all his people had gone, and he told us they had all made off as they were too frightened of the soldiers to remain at home. he like the others, promised to give us assistance, and we told him that if he did not his town will be burnt……we stormed down to Amassana, which was a town supposed to be friendly and fined them 25 goats and 20 chickens for non-assistance, then returned to Agbeni and burned half...October 1st was spent in continuance of yesterdays incendiraism by burning every town or farm we could see. I shudder to think of how many houses we have destroyed in these two days. On our way back to Egbbeddi in the afternoon we passed by Sabagreia and told our old friend Chief Ijor that most likely we should burn down Sabagreia the next day….”

So we ask, why is it that the Pope of the world has so far chosen to forget the more horrendous Holocausts of the entire continent of Africa? Perhaps it has something to do with the Papal involvement in the Slave deportations as his predecessor Pope’s were known to have freely owned and exchanged African slaves-

“…The Pope (Innocent VIII) was sent a hundred fine Moorish slaves, whom he distributed among the Curia and to friends, and granted Ferdinand II of Aragon the epithet “Catholic Majesty.”…” [9]

But this also should not be the reason why the Pope forgets African Holocausts in his sermons, because he is not the Pope’s in question, and his participation in the German Holocaust has been understood and forgiven with his clear statements of his rejection of it, so a similar approach will certainly also be acceptable by the world for the involvement of his church in the largest and longest ever known atrocity of genocidal proportion in human history that still leaves the continent psychologically destroyed and unable to recover. Hand cutting still practiced by the terrorized people of Congo, and the act of selling your clan, imbibed by the colonial demand for sales at the risk of having your village burned to the ground, still leaving the Africans crippled.

Or is it because Africa got reparation while Israel did not…oops it seems I put that the wrong way around, it is Israel that was granted reparations from Germany and from the world, including the apportioning to them of the land they now have, and it is Africa that is yet to even get a ‘sorry’, or an acknowledgment that they are humans after all and not 3/5ths a person on par with animals as is still written, though abrogated in the US constitution.

So our question remains- why forget Africa? perhaps we ask too soon, he has only been in office a few years, the Pope will soon visit and then he will yell and ask God also why he allowed this holocaust occur and why He still allows Africa, the land of the first man and a land of the greatest technological, cultural and economic revolutionizing developments in the history of the world, continue to be ravaged and exploited by un-free trade impositions, guns and toxic waste dumping, and new world slavery. Oh, once again, my error, he did already visit Africa [10] that was where he made his very famous speech on banning the use of condoms.

Maybe we must wait till he visits the Caribbean Islands, Jamaica, Haiti and the like, Nations built simply and exclusively for slavery, then he will remember and cry out.