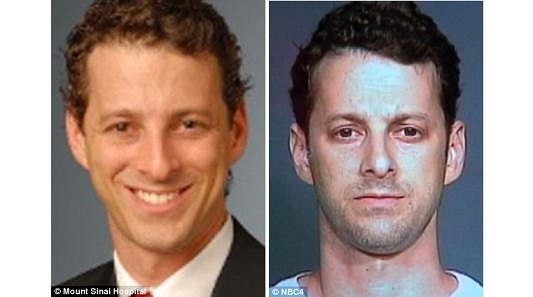 Editorial: You might want to close your jaw as well as your legs for this one

Dirty doctor: Mount Sinai Urologist Adam Levinson, 39, was arrested on Tuesday after a witness reported seeing him sticking a pen camera attached to a newspaper up women’s skirts

A top urologist at a prestigious Manhattan hospital has been arrested after he was caught using a pen camera to take pictures up women’s skirts in a crowded subway station.

Adam Levinson, 39, was arrested on Tuesday after a witness reported the Mount Sinai Hospital doctor holding a folded newspaper with the pen clipped on its end beneath at least two women’s skirts.

The assistant professor of urology, who had been teaching robotic surgery at the hospital’s school of medicine before his arrest, was arraigned on Thursday on a felony charge of unlawful surveillance.

According to WABC, Levinson’s suspicious behavior was spotted by a fellow passenger and former-Transportation Security Administration screener Sheldon Birthwright who saw him filming women on the southbound 4 train before moving to the L train’s platform at Union Square.

‘I said no, he’s not filming this woman,’ Mr Birthwright told WABC.

Mr Birthwright stayed near the officer during Levinson’s arrest. Method: The urologist was caught using a pen camera placed on the end of a rolled up newspaper, like this one pictured, to peek under at least two women’s skirts Sightings: Levinson was reported by the witness filming on the 4 train heading downtown before jumping off and filming another woman on the L train’s platform at Union Square

A spokesman for Mount Sinai said Levinson was suspended and that the hospital was ‘fully cooperating’ with the police and the District Attorney’s office.

On Thursday Levinson’s staff profile had been removed from Mount Sinai’s webpage.

His lawyer, Eugene Nathanson, said he hopes and expects the justice system will do its job. Witness: Shelden Birthwright, a former TSA screener, was riding with Levinson when he spotted his behaviour and notified a police officer Sneaky: Mr Brithwright demonstrated how he saw Levinson holding the rolled up newspaper, below his waist and tilting up slightly upward beneath the women’s skirts

According to the New York Post, Levinson graduated top of his class at New York Medical College, studying surgery at Columbia University and oncology at Johns Hopkins in Baltimore.

He had received an award for high patient ratings in 2011 and had no prior arrests in New York City.

A doorman outside his home in Manhattan told WABC that Levinson lives alone.