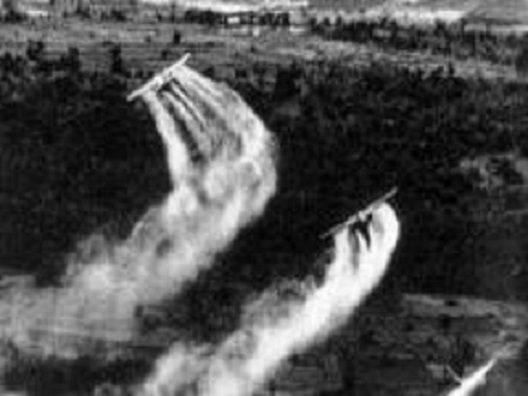 U.S. tested chemical weapons on poor and blacks during the Cold War… On the grounds that they were testing a shield against a Soviet nuclear attack in the city of Saint Louis, the U.S. military sprayed compounds over the local population used in the manufacture of chemical weapons.

In the 1950s and 1960s, the suburbs of St. Louis, Missouri, served as a prototype for testing toxic compounds…

On the grounds that they were testing a shield against a Soviet nuclear attack in the city of Saint Louis, the U.S. military sprayed compounds over the local population used in the manufacture of chemical weapons. That’s what a study conducted by Lisa Martino-Taylor, professor of sociology at Saint Louis Community College who scoured public documents and found cases of cadmium sulfide and zinc poisoning during the 1950s and 1960s.

According to the study, the U.S. military sponsored tests specifically in socially segregated areas of high population density, where there was a predominance of black and low income citizens. In an interview with the local news station KSDK, she said she was “very shocked by the degree of secrecy and deception” of the authorities responsible for operations. “They clearly did their best to deceive people,” she concluded

Tests of chemical weapons on humans have been the product of what Lisa calls the “Manhattan-Rochester Coalition,” a research program of the U.S. government that tried to measure in the context of the Cold War the impact of radioactive reactions in the human body. Similar experiments also have occurred in the city of Corpus Christi, Texas.

The most toxic compounds were poured from planes during flybys over the targets. However, Lisa claims that aerosol sprays were also positioned on top of skyscrapers and meteorological towers in the area. In 1953, there were altogether 16 tests – no less than 35 shots of zinc sulfide and cadmium in Saint Louis. The neighborhood most affected is described by Lisa as “a densely populated slum,” where about 10 thousand low income citizens lived, mostly children.

Surprised with the results obtained by Lisa, state lawmakers sought clarification from the armed forces on Monday (22/10). “The idea that thousands of citizens of Missouri were exposed to toxic materials against their will to determine their effects on health is absolutely shocking.  It should be no surprise that these people and their families are demanding answers from government officials,” said Republican state Senator Roy Blunt.

The Democrat, Claire McCaskill, and her colleague Blunt also called for greater clarification from the Secretary of the Army, John McHugh. “Both the Senate and the House conducted investigations throughout the 1990s, but nothing was ever done, explains Lisa Martino-Taylor. For her, the worst mistake was “never really having looked at those who were really affected.”

The research was unable to conclude with certainty whether there was indeed radioactive compounds through the mixture of cadmium sulfide and zinc. In her interview with KSDK, Lisa says that “there is ample evidence that there were radiological compounds involved in the experiment.”

His main hypothesis is that fluorescent particles were added to this mixture, used to “illuminate” targets and identify them for further tests. There is suspicion that a company called U.S. Radium was involved with this part of the experiment. “U.S. Radium had already been legally liable because of producing a radioactive dye that killed several painters of radioactive tiles,” it is alleged.

Questioned on the future steps of her inquiry, she reveals that the important thing was to have revealed “that all this was a violation of all medical ethics, all international codes and even the entire military regiment of the time.”