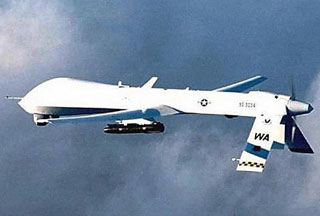 The United Nations has warned Washington about indiscriminate use of drone strikes in Pakistan and Afghanistan, saying that it may be breaking humanitarian law.

The UN rights investigator said the United States has done nothing to demonstrate that its not randomly killing civilians in violation of international law through the use of drones.

“My concern is that these drones — these predators — are being operated in a framework which may well violate international humanitarian law and international human rights law,” UN Special Rapporteur on Extrajudicial Executions Philip Alston told a press conference on Tuesday.

“The onus is on the government of the United States to reveal more about the ways in which it makes sure arbitrary extrajudicial executions aren’t in fact being carried out through the use of these weapons,” the top official added.

The UN investigator also criticized Washington for refusing to respond to UN concerns regarding the use of drone aircrafts in the troubled South Asian region.

“We need the United States to be more up front… otherwise you have the really problematic bottom line that the CIA is running a program that is killing significant numbers of people and there is absolutely no accountability in terms of the relevant international laws,” Alston stressed.

According to independent reports, since August 2008 alone, around 70 cross-border predator strikes carried out by American drones have resulted in the deaths of 687 Pakistani civilians.

Back in June, the US told the UN Rights Council that it has an extensive legal framework to respond to unlawful drone killings.

Washington also said that the UN investigator did not have the mandate to cover military and intelligence issues.

This is while Pakistani officials have repeatedly warned the US about such attacks, saying that it infringes the country’s sovereignty.