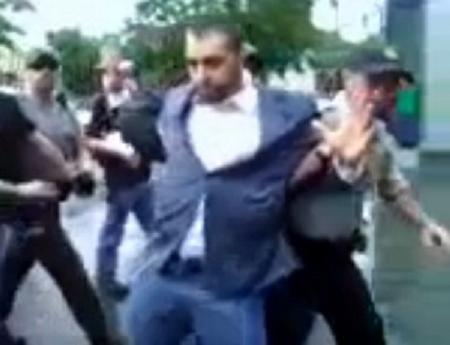 Radio host Adam Kokesh was arrested Saturday in Philadelphia during a Smoke Down Prohibition rally.

As witnessed in footage of the arrest filmed by fellow activists, Kokesh appears to have been arrested for the victimless crime of exercising his First Amendment right to free speech.

The talk radio host recently garnered national attention when he announced a July 4th armed march on Washington D.C. in defiance of the capitol’s firearms laws. As of yet, it’s unclear whether his connection to the upcoming event had anything to do with his arrest.

On the Sunday broadcast of the Alex Jones Show, Alex spoke to one of Kokesh’s crew members, Lucas, who stated the feds haven’t disclosed Adam’s location.

Since I broke the story last night on Digital Journal and The Liberty Sun, I have been closely monitoring the arrest of marine veteran and talk show host Adam Kokesh at the fifth “Smoke Down Prohibition” event in Philadelphia; But aside from the fact that Adam is a prominent figure in the alternative media, what makes this story so important? Upon analyzing the situation, it’s easy to come to the conclusion that there could be more to this story than meets the eye; and in this piece I hope to provide a strong account of the various aspects of this story which have me asking questions.

As many already know, Adam Kokesh was planning a peaceful armed march on Washington, D.C. on July 4th. Many people, myself included, are suspicious that perhaps Adam was specifically targeted because of this plan, which has garnered plenty of criticism from the mainstream world. Theorizing Kokesh’s targeting by the feds is justified for several reasons. For one, Kokesh has attended several other events of a similar nature and has never been arrested for his demonstration.

Aside from that, everyone who was in attendance at the event claims that Kokesh had not yet smoked marijuana nor was he doing anything to break the law at the time he was arrested. In fact, the only charges that have been brought against him, according to what is now public knowledge, are resisting arrest and refusal to submit to processing at the jail. Of course, any sane individual can see that these charges do not stand on their own and would be no reason for arresting Kokesh in the first place. Arresting someone for resisting arrest is like killing someone because they died; it just doesn’t make any logical sense. In addition to not having any formal charges against him (at least none currently known to the public) Kokesh has not been in contact with anyone. According to some of Kokesh’s employees, he has not been in contact with family or friends, including his staff members and his girlfriend. I am not the only one asking questions about Kokesh’s arrest, however.

Radio host and filmmaker Alex Jones interviewed two of Kokesh’s staff members on the Sunday edition of his radio show today and says he has plans to have them back on for tomorrow’s show. He released a video on YouTube directly following his show in which he discussed the ‘fishiness’ of Kokesh’s arrest. Kokesh’s staff is asking supporters to come out to Philadelphia tomorrow, when he is set to face a judge to set bail.