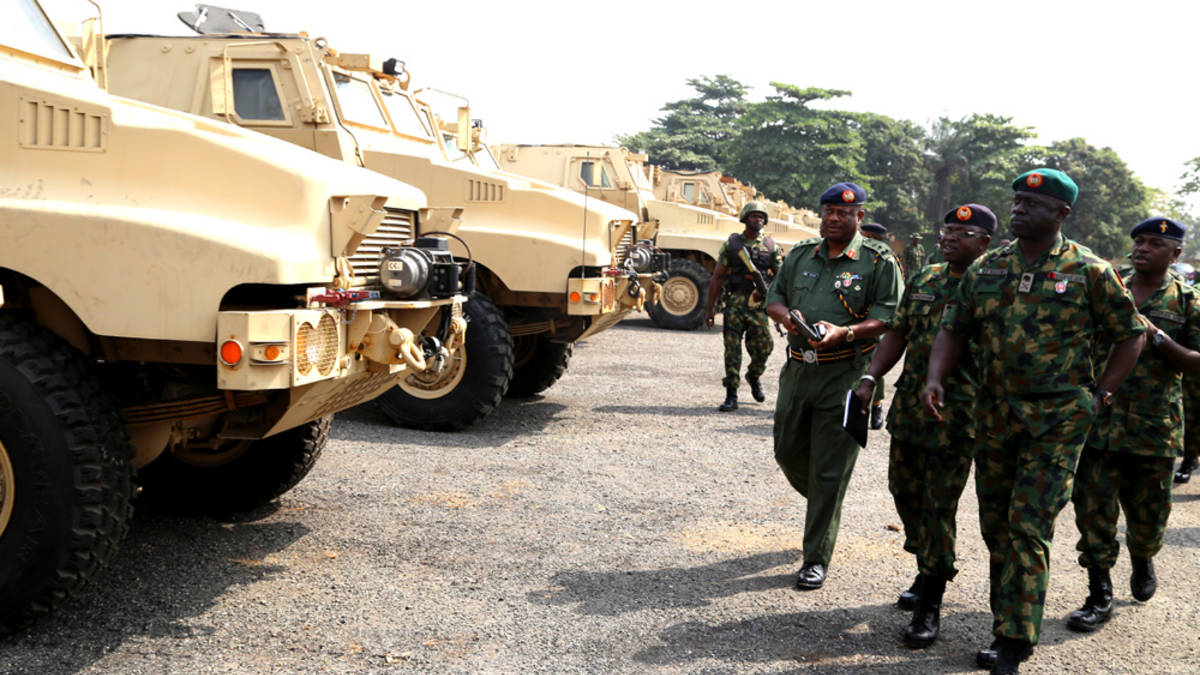 On Thursday, the United States government handed over 24 Mine-Resistant Vehicles (MRAPs) to the Nigerian military.

The exchange, which took place at the Ikeja Cantonment in Lagos, comes about one month after the Nigerian army brutally massacred up to 300 Shiite Muslim civilians.

On December 12 members of the Shiite Islamic Movement of Nigeria (IMN) clashed with the Nigerian army on the streets of Zaria in Kaduna State. The military claimed that members of IMN set up a roadblock in an attempt to trap and then assassinate Army Chief of Staff Lt. General Tukur Buratai. However, the IMN alleged that they were merely holding a peaceful protest.

Two days after the massacre, SaharaReporters obtained a video depicting a pile of dead Shiite Muslims along a street in Zaria which were being looted by passersby.

On top of the killing hundreds of Shiites, the army also captured the leader of IMN Sheikh Ibrahim Zakzaky after laying siege to his home for 11 hours. Grim photos subsequently emerged of Sheikh Zakzaky badly wounded and plopped into a wheelbarrow by Nigerian soldiers. More photos later emerged of Nigerian authorities destroying the home, properties, and important Shiite sites by fire or turning them into rubble.

As details emerged regarding the massacre several human rights organizations and foreign governments issued condemnations of the Nigerian military. The US government called upon President Muhammadu Buhari to launch an independent probe into the actions taken by the Nigerian army.

The 24 MRAPs provided to the Nigerian army by the United States are intended to assist Nigerian soldiers in their fight against the Boko Haram insurgency in the northeast, according to US government officials.

The vehicles arrived on New Year’s day and were provided as part of the US Excess Defense Program which allows the American military to offload excess military hardware to its allies.

During the brief handing over ceremony Colonel Patrick Doyle, the US Defense Attaché to Nigeria, referenced US-Nigerian military cooperation.

‎”For many years the Nigerian armed forces has been a strong partner of the United States,” he said.

“We have asked for your support in many endeavours, in particular throughout West Africa and you have responded,” Mr. Doyle added.

Major General BT Ndiomu, who also spoke at the ceremony, expressed gratitude for the vehicles.

“We express our most profound gratitude for the gift of Mine Resistant Ambush-protected vehicles to the Nigerian army. It couldn’t have come at a better time especially considering the challenges that confront our armed forces in the northeast,” Mr. Ndiomu noted.

The vehicles will require some repair, according to Colonel Doyle, but the US believes the Nigerian army is more than capable of making the adjustments.

It has also been reported by other media outlets that eight more vehicles are expected to arrive in Nigeria in the forthcoming days.

When contacted by a SaharaReporters correspondent, Amnesty International’s Nigeria Researcher Daniel Eyre noted that “there have been persistent human rights violations by the Nigerian army.”

Mr. Eyre added that “Amnesty International calls on all governments providing military assistance to do so without committing to human rights violations.”

Despite the transfer of military vehicles to the Nigerian army, a US State Department spokesperson told a SaharaReporters correspondent that “we remain deeply concerned by the December clash between members of the Nigerian army and a Shiite group in Zaria, Kaduna State.”

The same State Department official emphasized that the US expects its international partners to respect the rule of law.

Members of the public and human rights groups in Nigeria have questioned the anticipated outcome and credibility of the military-led investigations into the Zaria massacre, citing the conflict of interest involved in the army investigating itself.