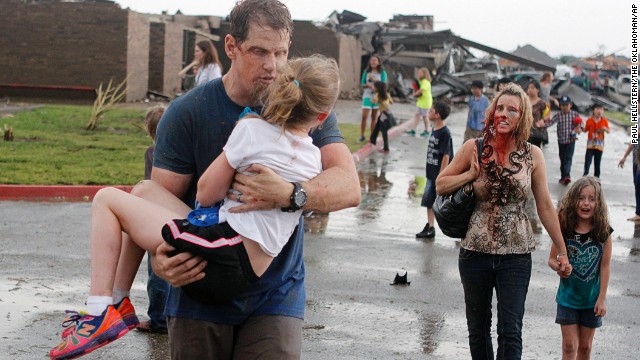 At least 20 of the dead were children, including at least seven from Plaza Towers Elementary School in Moore, which lay directly in the path of the monster storm’s wall of wind.

Seventy-five students and staff members had been huddled at the school when the tornado hit, CNN affiliate KFOR reported.

As nightfall descended, determined searchers in hard hats dug in the debris for those possibly trapped, but authorities described the work as a recovery, not rescue, effort. Search lights illuminated their efforts.

A father of a third-grader still missing sat quietly on a stool. Tears fell from his face as he waited for news.

“How do we explain this to the kids? How are they going to wake up tomorrow and everything’s missing — the school, these houses, their friends,” she said. “In an instant, everything’s gone.”

After the ear-shattering howl of the killer storm subsided, survivors along the miles of destruction emerged from shelters to see an apocalyptic vision — the remnants of cars twisted and piled on each other to make what had been a parking lot look like a junk yard.

Block after block of homes were gone. Bright orange flames flew from a structure that was blazing even as rain continued to fall.

“We certainly hope everyone heeded the warnings, but it’s a populated area and we just fear that not everyone may have gotten the word,” he said.

Bodies of those killed in the storm were being sent to Oklahoma’s office of the chief medical examiner, said the office’s Amy Elliott. At least 145 people were reported injured at three area hospitals.

The preliminary rating of damage created by the tornado is at least EF4 (winds 166 to 200 mph) — the second-most severe classification on a scale of zero to five — according to the National Weather Service.

The tornado was estimated to be at least two miles wide at one point as it moved through Moore, KFOR reported.

Lando Hite, shirtless and spattered in mud, told the CNN affilaite about the storm hitting the Orr Family Farm in Moore, which had about 80 horses.

“It was just like the movie ‘Twister,'” he said, standing amid the debris. “There were horses and stuff flying around everywhere.”

‘This is not over yet’

Speaking to reporters Monday night, Oklahoma Gov. Mary Fallin said that officials are doing everything they can to help find people who may be lost or injured.