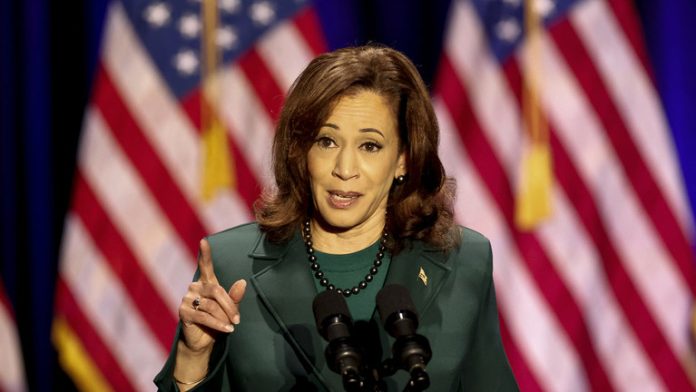 In a speech commemorating the 50th anniversary of Roe v Wade, the 1973 Supreme Court decision that made abortion a federally protected right before its reversal last year, US Vice President Kamala Harris left out Americans’ right to life from the Declaration of Independence.

“America is a promise…of freedom and liberty,” Harris told an audience at Tallahassee’s Moon nightclub on Sunday. “We made a promise in the Declaration of Independence that each of us has the right to liberty and the pursuit of happiness.”

All men are endowed with the “right to life, liberty, and the pursuit of happiness,” according to the famous passage.

The White House is having difficulty naming the VP’s accomplishments.

Harris then went after the text of the national anthem.

And can we truly be free if our leaders claim to be “on the vanguard of freedom” while restricting the rights of the American people and attacking the very foundations of freedom?

The quote about being a “vanguard of freedom” was a jab at Florida Governor Ron DeSantis, who used the phrase in his inaugural address earlier this month and has described his legislative agenda as a “blueprint for freedom.”

Protests have raged since the Supreme Court overturned Roe v. Wade in a June decision, transferring responsibility for abortion regulation to the states. While Harris warned her audience that Republicans were planning a “nationwide abortion ban” to take away their reproductive rights, no such legislation has been introduced in Congress. Senator Lindsey Graham (R-SC) did introduce legislation prohibiting abortions after 15 weeks, and a similar ban went into effect in Florida in July.

On the campaign trail in March 2020, then-candidate Joe Biden also botched the Declaration of Independence, telling a Texas audience, “We know these truths to be self-evident: all men and women are created equal, by the, you know, the thing.”