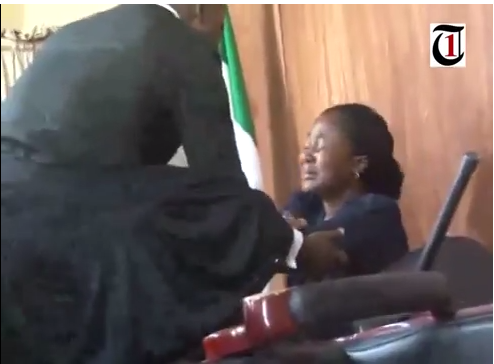 by Ogala Emmanuel and Amina Mohammed

The Bayelsa State Governor, Seriake Dickson, on Monday led a gang of thugs to attack a Federal High court in Bayelsa, a video obtained by PREMIUM TIMES has shown.

The video shows the governor, dressed in traditional Ijaw blazers, walking into the court premises, accompanied by his police guards and hangers on, before hooligans, including rifle wielding police officers, invaded and attacked the court.

The thugs were chanting “we no go gree, for this state, e no possible” as they walked into a court hearing. Loud gunshots could be heard shortly before the hooligans began breaking glasses and destroying properties inside the court.

At least 15 lawyers, including a pregnant woman and two Senior Advocates of Nigeria, were in the court during the attack.

The governor walked out of the court premises at the peak of the attack.

Most police officers seen within the court premises during the attack either aided the attacker or looked on, idly.

Only one police officer was seen, in the video, after the attack, trying to help the injured.

The thugs upturned chairs within the court room, scattered files all over and shattered glass windows as lawyers ducked under tables. A female lawyer covered herself with a chair.

Another could be heard saying her upper arm was hurting.

An elderly man, who was seemingly brought out of the court room by police officers, gasping for breath, said he was badly beaten by the thugs who came into the court room.

“The governor and his troops walked into the court room and I was beated (sic),” the victim said.

Why Dickson stormed the court

According to Heineken Lokpobiri, a serving senator, the court was in session to deliver a judgment on his case against the governor’s preferred senatorial candidate, Foster Ogola, over the validity of the later’s candidacy for Bayelsa West senatorial district.

Mr. Lopkobiri claimed his party, the Peoples Democratic Party illegally substituted his name with Mr. Foster’s, and had filled a suit accusing Mr. Foster of issuing false information to INEC.

Mr. Lokpobiri added that the attack on the court was the second, claiming that earlier, thugs had come to seal the court and stopped the Judge from entering the court, forcing an adjournment.

Mr. Lokpobiri told PREMIUMTIMES he was shocked and irritated by the governor’s action at the court.

Mr. Lokpobiri said the governor has the right to support his opponent, but has no right to bring thugs to attack the court.

“All these things happened in the presence of the commissioner of police and am surprised. If the governor did not lead the thugs, it would have been a different thing entirely,” he said.

The governor’s spokesman, Daneil Iworiso, told PREMIUM TIMES the incumbent governor did not lead any gang to the court.

But in the video, Governor Dickson was clearly seen storming, and at the end of the attack, leaving the court accompanied by thugs and police officers.

Mr. Iworiso however described the video as photoshopped.

“You know its election time and we need to ensure that no violence occurs in our state, as soon as we heard of the clash we went there with commissioner of police and armed men to try to cub the situation that was when we found out it was a case between the incumbent governor and aspiring governor,” he said.

He explained that the governor was not there when the clash started, stating that it was all propaganda.

“When I saw the video I was just laughing because it was all photo shoot, and I describe that as poor representation of what happened there and I was also there,” he said.

Mr. Iworiso accused Mr. Lokpobiri of also bringing thugs to the just-concluded PDP primaries, stating that he is known for carrying thugs around Bayelsa state.

Mr. Lokpobiri admitted he has a loud crowd and followership but that his followers and loyalists are peaceful.

“If he is accusing me of carrying thugs in the last primaries, did they destroy anything or harm anyone during the election,” Mr. Lokpobiri said.

Although several police officers were present when the attack occurred, the Bayelsa Police Command said no arrest has been made in relation to the incident.

Asinim Butswat, the state police spokesperson, said he had no information that the governor led the thugs to the court premises.

“What we know is that the governor visited the court and the thugs took advantage of his visit to force the gate open and invade the court,” Mr. Butswat said.

“The police officers on the court premises did not know the thugs came to cause havoc because they were not armed.

“After they attacked the court, they all fled before they could be arrested.”

Mr. Buswat denied the state police commissioner was present when the court was attacked, saying he only visited the court “shortly after the incident”.