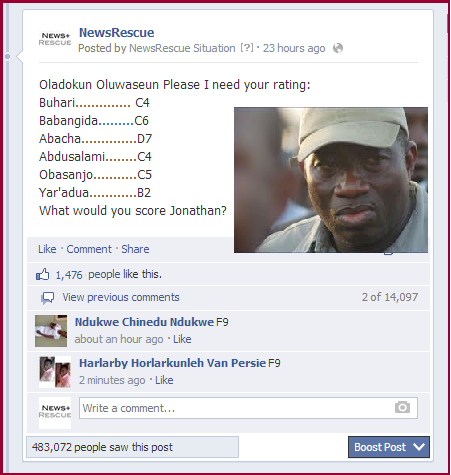 NewsRescue– In a viral open poll posted on the NewsRescue facebook page, March 29th, viewed by over 567,560 Nigerians so far, with responses by over 16,625 participants from across Nigeria, approximately eight in ten (80%)Nigerians gave the current President of Nigeria an F9 or equivalent rating. About two in ten (20%) gave him an “A1” or similar approval score for performance when compared to past leaders.

Several responses were extreme, like, “red card,” and F10, G10 and Z10 or z1000, which we translated to F9’s to get our approximate statistical results. Some interesting comments included that he got an A1 courtesy of examination malpractice; and another that he got an A1 in vampire-ism–sucking peoples blood.

The president did have his few adamant supporters who kept reposing A1’s and A0’s. Some said they needed 6 more months to be able to grade him.

Funny comments included, “Drop out,” “carry over,” “Who Authorised you to score any of them? You are going beyond your limit!!,” “F9 upper highest upper,” “F9 parallel,” “Ommision of result,’ “cancelled result,’ and a lot of “E8, ” with no spill over.

The state of the economy, the prevalence of corruption and impunity including the missing billions of dollars, pension funds and the like, an all time low international reputation, high electricity bills for no power, Stella, Moro, Diezani, Wike, etc, the level of insecurity in the nation, unemployment especially of the youth and the recent deadly immigration scam are few of the reasons that have made the present government unfavorable in the eyes of the people.

The president had his worst rating with F9’s given by more than 90% among northern sounding name respondents, who have notably suffered the most from the poverty and insecurity of the administration. Among southern sounding names, there was a little more patronage with about 74% giving the president F9 and 26% giving him A1 scores; though he had very poor rating among South-south and south-west respondents it was eastern-sounding respondent names that were majority of his A1’s in the South.

Another comment by Oladokun Oluwaseun, “…The first president to declare his asset in human race came from them. The first president to ever revert back the fuel price sacrificing his N5 of the fuel price portion to the Nigerians. Late Umar Musa Yar’adua I miss you. Gone but never forgotten. [Yar’adua legacy https://newsrescue.com/?p=26110 ],” received much praise as most Nigerians north and south gave their respect and kudos to the late president Umaru Yar’Adua, declaring how great a man he was and how different his abbreviated rule was compared to that of the current president and the Obasanjo regime. Someone posted that the cabal killed Yar’Adua to return the looters to the helm.

After spending more than four + years as president (he completed 1 year of his predecessors term) and 3 more as deputy, making a total of 7 years so far in Aso rock, president Jonathan has less than 11 months to elections; it will be great if he does some strong and good things to give Nigerians some little fresh air he promised and things that Nigerians will appreciate and remember him better for if he does not contest or does not win re-election.