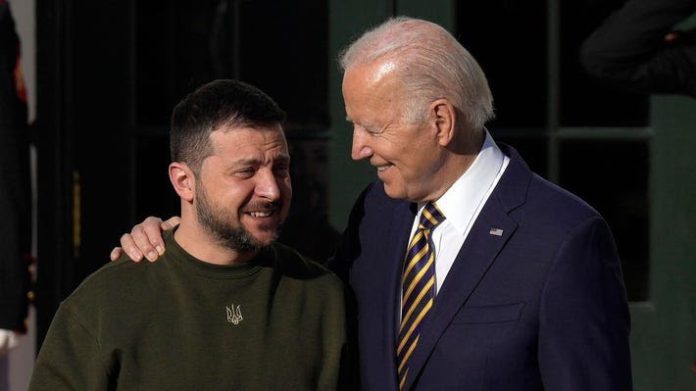 Joe Biden will conduct a press conference with Ukrainian President Volodymyr Zelensky on Wednesday at 4:30 EST to discuss bilateral collaboration in response to Russia’s special military operation in Ukraine.

The puppet president and his wife, Jill Biden, welcomed Zelensky to the White House earlier in his first foreign travel since the Ukraine conflict began in February.

“I am in Washington today to thank the American people, the President, and Congress for their much-needed assistance,” Zelensky said after landing on Instagram. “And to continue working together to bring our victory closer.”

Following his meeting with Biden in the Oval Office, Zelensky will also address Congress.

The besieged Ukrainian leader claimed that the $45 billion budgeted for Ukraine in the $1.7 trillion omnibus bill up for vote this week was insufficient.

“We’re not in a good situation. The enemy’s army is growing. “Our people are bolder and require more powerful weapons,” he remarked of the Ukrainian conflict.

“We will pass it on from the boys to the Congress, to the president of the United States. We appreciate their assistance, but it is insufficient. It’s a suggestion, but it’s insufficient,” he added.