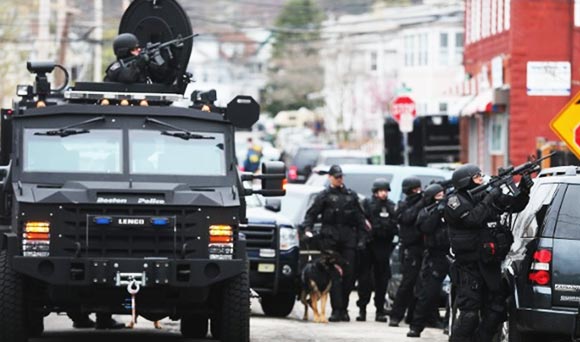 NewsRescue- The above is the remark made by Nigeria’s late National Security Adviser (NSA) Andrew Owoye Azazi, in relation to the need for president Jonathan to declare a “state of emergency,” in Kaduna during an episode of severe ethnic crises.

Nigeria has no president. The guy that occupies the office has no spine and no intention to uphold the constitution he took oath on, with promise to defend and protect the life of the nations citizens.

But in Nigeria, we are monkeys. Our lives are valueless.

Boko Haram and Nigeria’s security forces engaging them within a town, killed over 200 Nigerians and burned hundreds of houses, and yet there was no lock down to protect further loss of life.

A most brazen, armed and drugged up Boko Haram, a 200 strong army, followed up by burning down all public buildings in another town, killing over 60 people including 30 plus police and prison wardens and 2 soldiers when they culminated the attack by daring to ambush a military barracks. Yet, with this, it was business as usual. Less than 13 of the armed militia who carried out the attack were killed, the rest 187 and over 2000 more Boko terrorists are still free, and yet the government sees no need to halt normal activity in the north east.

According to a Borno senator, Zanna, interviewed on SaharaReporters, Boko Haram has over 2000 members that live happily 45 km from Maiduguri in a publicly known area, undisturbed by the Nigerian military forces; and now controls 24 of 27 local governments in Borno state, all government offices are non operational in these localities, schools and everything “western,” have been closed in accordance to Boko Haram rule, and all government officials have abandoned post; yet Nigerian government tells its people, that things are normal, keep on with business all day and all night in “Gods hands.”

In Nasarawa, armed cultists decided to ambush and murder dozens of police men. Nigeria’s government quickly wrote a paltry cheque of N1m for the wives to shut them up, and begged the law enforcement to leave the occultists who murdered our security agents, alone.

So we ask, what does it take for a state of emergency to be declared? Let us guess wisely, – anything that glaringly jeopardizes the presidents “popularity,” among the elite? Sure. That’s what it takes. Once the so-called governors, declare they want stuff done this or that way, the president, or do we say, the lack of it, jumps to their manipulations.

Once they converge to demand an amnesty, he flips over from his stand the day before, to agree to offer it.

About that, what happened to the amnesty for Boko Haram terrorists?

Last we heard, the amnesty committee members were trying to meet with arrested terrorists in prison cells to discuss. What a joke. Soon they will also attempt meeting with slain terrorists to see if their carcasses can help them appeal to the high-on-heroin leaders in Niger and Cameroon and all their Nigerien, Cameroonian, Malian and Chadian terrorists to accept Nigeria’s money- less than they make currently from kidnapping.

The governors are only politicians and not leaders. They only seek political relevance and care not an ounce about life. Why will they, when they have a money guaranteed pact with Boko Haram not to kill their own families.

So it’s only the civilians and now the nations security forces that die while they play their politics and ensure they are proper clogs in all wheels.

He is absent. He is running after the governors who mean him and Nigerians no good.

Little wonder they sacked and then killed Azazi for daring to decide that he was tired of the lies and covering up murderers. For daring to admit to the people that he rejected the ways of his own “brother,” who remained stuck in the path of top down terrorism.

And they even ended up killing one of their own, a poor governor like them who Azazi invited to fly with him in the doomed helicopter.

Yes, this is how careless they are with lives, even their own. Taraba state governor, anyone? Still in Germany?

General Azazi was a true hero of the Nigerian people, who will never be forgotten. He dared to implicate the president and his PDP co-runners as being the ones who facilitated the turnover of mere hoodlums into highly skilled and trained, world standard terrorists. In a nation with the worlds most hopeless security services.

Being the NSA, his information was authentic. That’s his job. So they killed him for it.

General Aliyu Gusau (Rtd), the spymaster, and triple NSA, who was NSA when Boko Haram armed itself, was clearly implicated by Azazi, and possibly Atiku too. Gusau, the intelligence chief and the only person who has the intelligence know-how to arm or to have prevented the arming of Boko Haram during his tenure under Obasanjo.

Yet the president is yet to call him for questioning, rather he invited his “friend” to become NSA for the second time in his administration and fourth time in Nigeria’s history. Gusau rejected. Obviously he is pre-occupied with running other “personal engagements.”

What better solution than putting the person responsible for the insecurity, in charge of the insecurity. Perhaps the presidents wisest play, since as he says, he “knows the sponsors,” but dares not expose them and invite them for interrogation.

So do we expect this leadership vacuum to do the right thing? Of course we do not. They have not nearly had their fill of our blood spilling in Nasarawa, in Borno, in Yobe, in Abia, in the creeks, where they pay terrorists to act as security agents.

Here’s my suggestion for Nigerians – who are dozens times more in numbers than these few vampires, yet decide to keep letting them destroy us. Let’s all line-up and walk to Aso rock and bleed ourselves for them, one by one. Let’s give them their fill of blood. At least we would be written of in history as having done something. The “monkeys,” who choose their time and their terms to give their blood.

Related: Nigeria launches Every Nigerian Do Something [ENDS] program