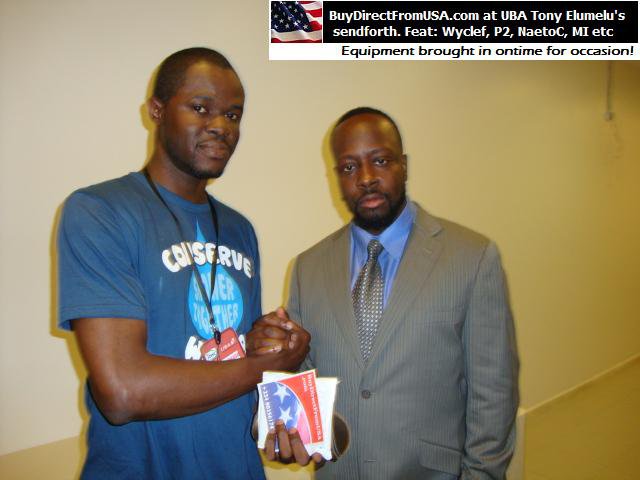 Wyclef Jean, hinted this decision earlier in a press interview he granted while in Nigeria for a United Bank of Africa(UBA) occasion for the outgoing MD of the UBA conglomerate, Tony Elumelu with important dignitaries, like the former president of Nigeria, Obasanjo, state governors, representatives of the current president, Goodluck Johnathan, representatives of the presidencies of Burkina Faso, Sierra Leone and other African leaders, Edi Lawani’s Showbiz Network services-who managed the event, and many more prominent dignitaries.

CNN- Hip-hop artist Wyclef Jean says he has submitted the necessary paperwork to run for president of Haiti, a country he left when he was a child.

Jean made the anticipated announcement Thursday on CNN’s “Larry King Live.” The singer traveled to Haiti to submit the paperwork.

Jean was one of the first, and most visible, celebrities to offer aid after a devastating earthquake hit Haiti in January. He has also been an outspoken proponent of the nation through his Yele Haiti Foundation, which has come under scrutiny for how it spends its money.

“Yes, it’s my first time announcing it live — that today I went in, and I signed, and I am running to be the president of Haiti,” said Jean, in his first television interview about his decision to run.

Whoever is elected in November, the new president will face the monumental task of rebuilding the country that was ravaged by a January 12 earthquake that killed more than 220,000 people, destroyed 60 percent of government infrastructure and left more than 180,000 homes uninhabitable.

Whoever steps in will also oversee the billions of dollars in international aid promised to the country since the quake.

“Now that our country has toppled, it’s a chance to rebuild from the bottom on up,” Jean said, adding he will be the voice of Haiti’s youth.

Jean’s announcement quickly became a top topic on the internet, with many debating whether the music star best known for rapping, playing the guitar and dancing, could actually lead a country.

One outspoken critic was actor Sean Penn, who has lived in Port-au-Prince, Haiti, for months to help manage 50,000 displaced Haitians living in a camp.

“What the Haitian people need now is a leader who is genuinely willing to sacrifice,” Penn said. “I haven’t seen or heard anything of him in these last six months that I’ve been in Haiti. I think he’s an important voice. I hope he doesn’t sacrifice that voice by taking the eye off the very devastating realities on the ground.”

Penn mentioned past allegations that Jean mishandled funds from his nonprofit organization Yele Haiti and used some of the money donated for Haitians.

At the time, Jean tearfully denied the allegations that he misappropriated funds from his Yele Haiti charity and experts on nonprofits said they couldn’t find serious wrongdoing.

Jean shot to fame in the mid-1990s as a member of the Fugees, a U.S.-based hip-hop and reggae group. He now performs as a solo artist.

Jean was born in Haiti, and moved to the United States as a young boy. He recently resigned as chairman of the Yele Haiti Foundation.

Jean, dressed in a gray suit and a red-, black- and white-striped tie, stressed the need for Haiti to improve education, as well as its agriculture, security and health care. He also said job creation would be a central part of his campaign going forward.

Remembering Wyclef’s song- ‘If I was President’, we wish him Goodluck!