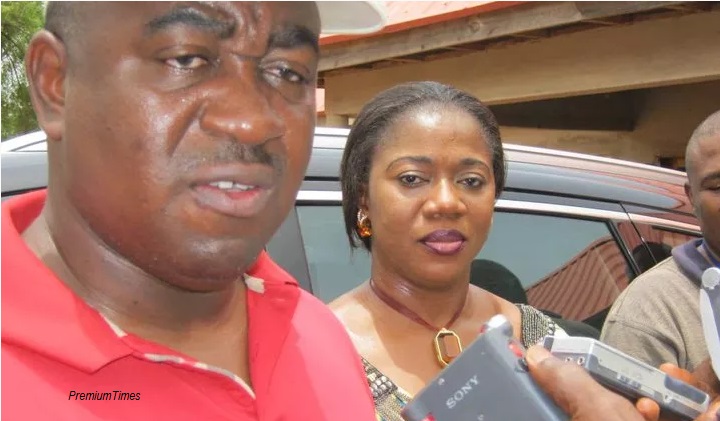 A member of the legal team representing victims of the killings, Sebastine Hon, on Wednesday blamed Mr. Jonathan for diverting the funds meant for the settlement of the massacre victims to the Benue State Governor, Gabriel Suswam.

In a petition to the president dated January 14, and signed by Mr. Hon, Ocha Ulegede and Chris Alashi, all members of the legal consortium for the massacre victims, the lawyers described Mr. Jonathan’s action as “most embarrassing and shocking.”

The lawyers also described as embarrassing, claims by the Attorney General for the Federation and Minister of Justice, Bello Adoki, that Alexander Gaadi, the lead plaintiff gave a mandate to Mr. Suswam to collect the judgment debt.

They insisted that no such mandate was given by Mr. Gaadi and never did such an issue presented at the various discussion held between the legal team and the government.

“Since the matter is before the Court of Appeal awaiting out-of-court settlement, we wonder whether it is Mr. Suswam who would be signatory to the settlement terms to be adopted as consent judgment of the court,” a part of the petition reads.

“In law, it is never heard of that strangers to a court judgment would be permitted to enforce the judgment of the court.”

PREMIUM TIMES investigation showed that neither Mr. Suswam nor the Benue State Government was a party toor supported the long-drawn legal battle between the massacre victims and the Federal Government of Nigeria.

Fiery Tiv activist, Mr. Gaadi led 13 others and a consortium of lawyers including Messrs Hon, Ulegede and Alashi, to sue former President Olusegun Obasanjo and the Nigerian Army after the killings.

After six years of legal battle, a Federal High Court in Enugu on July 5, 2007, ruled in favour of the massacre victims and awarded N41.8billion damages against the government.

After the ruling, the judgment creditors secured an absolute order to compel the Central Bank of Nigeria, CBN, to release the funds to victims of the massacre.

A Federal High Court in Enugu, headed by Justice Lewis Allagua, issued the order on October 27, 2007.

But when the government failed to honour the court ruling and the order to pay the judgment debt, counsels to the massacre victims entered contempt proceedings against the CBN.

The government went ahead to secure a restraining order from the Appeal Court to stop the committal proceedings on October 25, 2007.

Again on March 3, 2009, the government through its counsels, D.D. Dodo, Adoke Bello, Senior Advocates of Nigeria, SAN, and Innocent Daagba secured another restraining order against the payment of the judgment debt.

It was at this point that the judgment creditors filed an appeal to the Supreme Court challenging the second restraining order secured by the government.

The Supreme Court did not hear the appeal but directed the legal team to approach the Appeal Court to set aside the restraining order.

While the parties were exploring out of court settlement processes, Mr. Gaadi, the lead judgment creditor, died on September 15, 2011.

Mr. Gaadi’s demise came barely a month after the government agreed to a compromise deal of N8 billion and shortly after Mr. Adoki, formerly one of the government’s counsels was appointed Attorney General for the Federation and Minister of Justice.

At a press conference on March 4, 2013, the governor had reportedly told journalists how the state government sued the Federal Government over the Zaki Biam killings and how the Appeal Court awarded it N40 billion in compensation.

Mr. Suswam also indicated meeting Mr. Jonathan and the Finance Minister, Ngozi Okonjo-Iweala, who he claimed complained of paucity of funds but agreed to pay N8 billion after all.

“We are almost being paid. We took the Federal Government to court and we got judgment of N40 billion,” Mr. Suswam is quoted to have said.

Cletus Akwaya, the chief press secretary to Mr. Suswam told PREMIU TIMES the state government has constitutional duty to ensure the wellbeing of the people of the state.

“Whether the state government was involved in the litigation or not, since the resources are coming to Benue citizens the government must be involved,” he said.

He argued that the government was not embezzling the funds but was interested in ensuring the real victims benefitted from it.

Mr. Akwaya said the federal government did not pay the compromise funds because of the court ruling but because of Mr. Suswam’s intervention.

“This has happened in many other places. There are several parts of the country where such killings took place but government has not done anything.

When reminded that similar payments were made in Odi, Bayelsa State, he said, “Zaki Biam is different from Odi.”

Asked why the state government failed to take the Federal Government to court but waited for private citizens to win a case before stepping in, he said, “It was a matter of strategy. The state government had representatives and in this case Dr. Gaadi and other litigants.

“Again, this is a legal issue. If the people feel that the state government should not be involved, the attorney general for the federation will determine who collects the money based on his interpretation of the law.

“This is a legal issue. People should not bring their own whims and caprices into this matter. The legality of the matter will be based on interpretation of the law.

“If the state government is justified by law to take custody of the funds, the Federal Government cannot be said to have done anything illegal. Anybody who feels aggrieved can seek legal redress. If anybody feels that Benue Government should not be involved, there are many legal avenues to seek redress.”

Peter Akper, one of the aides to the attorney general for the federation and minister of justice refused to speak on the issue when PREMIUM TIMES contacted him.

Calls made to the minister’s telephone failed to connect and a text message sent to him was not responded to.