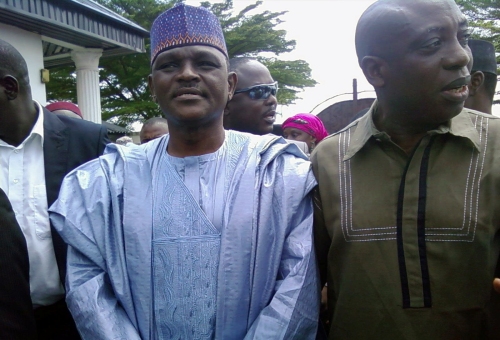 NewsRescue– Major Hamza Al-Mustapha, Mujahid Asari Dokubo, Dr. Fredrick Fasheun, Mohammed Abacha and Chief Ralph Uwazuruike are gathering in Owerri, Imo State for a meeting which organisers say would pave way for the unity of youths in the country.

The gathering of these personalities yesterday surprised political observers because they are coming from differing backgrounds and tendencies.

Major Al-Mustapha, who was just freed of murder charges after standing trial for 15 years, was the former Chief Security Officer to the late Head of State General Sani Abacha.

Mujahid Asari Dokubo was, until the introduction of government’s amnesty progamme four years ago, leading the Niger Delta Volunteer Force (NDVF) in an insurrection against the Federal Government. He has recently been threatened violence should President Goodluck Jonathan lose the 2015 election.

Dr. Fredrick Fasheun is founder of the Odua People’s Congress (OPC), which is engaged in a campaign for fiscal federalism. A faction of the group is known to have violent tendencies, and was blamed for the killing of many Northerners in the Southwest years ago.

Their host, Chief Ralph Uwazuruike, is currently leading the separatist Movement for the Actualisation of Sovereign State of Biafra (MASSOB) to break away the southeast out of Nigeria. Such attempt by the late Odumegwu Ojukwu led to a three-year civil war that was crushed by federal troops in 1970.

However, some of members of the delegation for the Owerri meeting dismissed suggestion the programme is related to the politics of 2015 or that they are being promoted by the Presidency.

Al-Mustapha, who led the delegation to Owerri, while speaking at the palace of Eze Nri, Eze Obidiegwu Onyesoh of  Nri Kingdom, Anaocha Local Government Area of Anambra State, stressed need to create a bridge for the younger generation to crisscross Nigeria in peace, unity and harmony.

He said for the people to understand how to prosper, it must be through the spirit of brotherhood and building of a bridge of peace. He said the country must work out modalities for greater interactions, unity and understanding.

“We are leaders of youths in North West, North Central, North East and South-South and delegation from South West led by Fasheun and of course others who are with us,” Al-Mustapha said.

“We decided to pay you a courtesy call and to bring to you our desire to bridge the gaps in this country so that peace, unity and development will envelop the entire nation.”

Al-Mustapha said they came together as the sons of all the six zones, leaders of associations, youth bodies and movements, to chart a course that will promote peace and harmony. Earlier in his speech, the monarch commended Al-Mustapha and other members of the delegation for their work toward peace and unity in the country.

He advised them to employ dialogue and non-violence in pursuit of their objective.

At Okwe in Onuimo Local Government Area of Imo state, the home of Biafran warlord Ojukwu, Al-Mustapha was received with a 21-gun salute. He called for forgiveness and tolerance among all ethnic groups in the country. 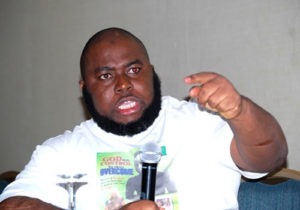 Earlier on arrival at the airport in Owerri, Al-Mustapha and the delegation were received by the MASSOB leader as well as the head of the Voice of the People Foundation, Chief Steve Orji.

Our correspondent reports that there was a large turnout of Igbo leaders and members of MASSOB to receive the visitors.

In a brief chat with newsmen at the airport, Mujahid Asari Dokubo said they were in the state to discuss issues bordering on security and other challenges facing the country with a view to proffering solutions.

A town hall meeting is holding today at the home of the MASSOB leader after which a communiqué would be issued.

Speaking to Daily Trust from Owerri by telephone, Al-Mustapha’s brother, Nasiru G.N. Hamza, said the coming together of these leaders from different parts of the country was spontaneous and had no political undertone.

“As far as I know there is no 2015 consideration in this gathering. It is purely about youths and how to bring them together for the purpose of engendering peace and unity in Nigeria,” he said.

He said the youths were the ones that feature prominently in any crisis and that it was important to bring them on board in the quest for peace in the country. 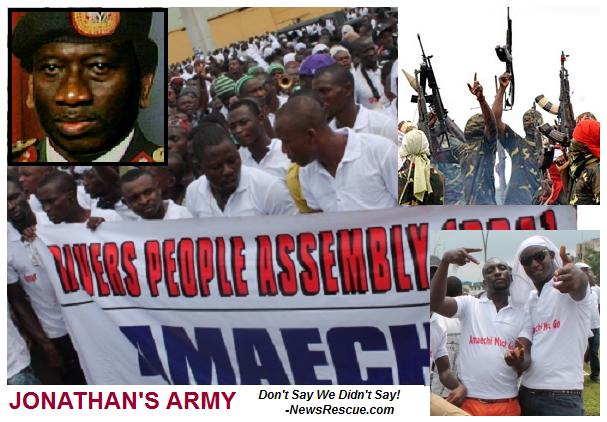 Hamza rejected suggestions that Al-Mustapha is working in aid of President Goodluck Jonathan’s 2015 ambition because the Presidency played a role in securing his freedom from his murder trial.

He said all the leaders that have come together are known to Al-Mustapha and that they stood by him during his trial, adding that they have now come together to work for the cause of peace and unity of the country. –DailyPost