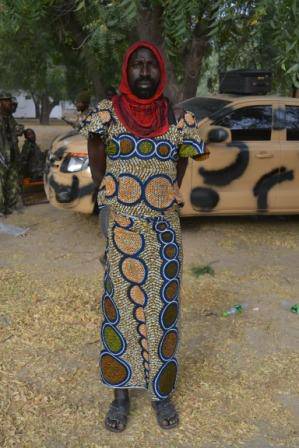 New video has revealed that a bearded man dressed as a woman that the Jonathan government put on display while pushing for an extension of the presidential election dates, was actually an ambushed Nigerian army soldier.

From the 15 minute video in which Nigerian soldiers are heard debriefing their comrade, the true events can easily be grasped. The man was never a disguised suicide bomber as the Alex Badeh-led military under Jonathan had portrayed but was a soldier who was lucky to have hidden and survived when Boko Haram attacked.

The man described that when Boko Haram terrorists with “very high morale” attacked their base, the soldiers were killed and fled under their superior power and morale. He said he dived in a trench and pretended dead and was thus lucky to survive.

He wore the women clothes to disguise and hid while he watched Boko Haram in operation.

The Nigerian soldier further commented that while Boko Haram drove in various vehicles including APCs, the Nigerian airforce that came to bomb did not bomb the terrorists vehicles but dropped bombs else where.

The soldier further relayed that Boko Haram leader Shekau had an official white Hilux truck with flags on it.