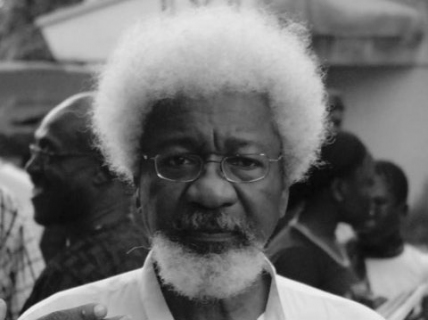 The Canonisation Of Terror By Wole Soyinka

The sheer weight of indignation and revulsion of most of Nigerian humanity at the recent Boko Harma atrocity in Yobe is most likely to have overwhelmed a tiny footnote to that outrage, small indeed, but of an inversely proportionate significance.  This was the name of the hospital to which the survivors of the massacre were taken. That minute detail calls into question, in a gruesome but chastening way, the entire ethical landscape into which this nation has been forced by insensate leadership.  It is an uncanny coincidence, one that I hope the new culture of ‘religious tourism’, spearheaded by none other than the nation’s president in his own person, may even come to recognize as a message from unseen forces.

For the name of that hospital, it is reported, is none other than that of General Sanni Abacha, a vicious usurper under whose authority the lives of an elected president and his wife were snuffed out.  Assassinations – including through bombs cynically ascribed to the opposition – became routine. Under that ruler, torture and other forms of barbarism were enthroned as the norm of governance.  To round up, nine Nigerian citizens, including the writer and environmentalist Ken Saro-wiwa, were hanged after a trial that was stomach churning even by the most primitive standards of judicial trial, and in defiance of the intervention of world leadership. We are speaking here of a man who placed this nation under siege during an unrelenting reign of terror that is barely different from the current rampage of Boko Haram. It is this very psychopath that was recently canonized by the government of Goodluck Jonathan in commemoration of one hundred years of Nigerian trauma.

It has been long a-coming. One of the broadest avenues in the nation’s capital, Abuja, bears the name of General Sanni Abacha. Successive governments have lacked the political courage to change this  signpost – among several others – of  national self degradation and wipe out the memory of the nation’s tormentor from daily encounter. Not even Ministers for the Federal Capital territory within whose portfolios rest such responsibilities, could muster the temerity to initiate the process and leave the rest to public approbation or repudiation. I urged the need of this purge on one such minister, and at least one Head of State. That minister promised, but that boast went the way of Nigerian electoral boast.  The Head of State murmured something about the fear of offending ‘sensibilities’. All evasions amounted to moral cowardice and a doubling of victim trauma. When you proudly display certificates of a nation’s admission to the club of global pariahs, it is only a matter of time before you move to beatify them as saints and other paragons of human perfection. What the government of Goodluck Jonathan has done is to scoop up a century’s accumulated degeneracy in one preeminent symbol, then place it on a podium for the nation to admire, emulate and even – worship.

There is a deplorable message for coming generations in this governance aberration that the entire world has been summoned to witness and indeed, to celebrate. The insertion of an embodiment of  ‘governance by terror’ into the company of committed democrats, professionals, humanists and human rights advocates in their own right, is a sordid effort to grant a certificate of health to a communicable disease that common sense demands should be isolated. It is a confidence trick that speaks volumes of the perpetrators of such a fraud. We shall pass over – for instance – the slave mentality that concocts loose formulas for an Honours List that automatically elevate any violent bird of passage to the status of nation builders who may, or may not be demonstrably motivated by genuine love of nation.  According generalized but false attributes to known killers and treasury robbers is a disservice to history and a desecration of memory.  It also compromises the future. This failure to discriminate, to assess, and thereby make it possible to grudgingly concede that even out of a ‘doctrine of necessity’ – such as military dictatorship –  some demonstrable governance virtue may emerge, reveals nothing but national self-glorification in a moral void, the breeding grounds of future cankerworm in the nation’s edifice.

Such abandonment of moral rigour comes full circle sooner or later. The survivors of a plague known as Boko Haram, students in a place of enlightenment and moral instruction, are taken to a place of healing dedicated to an individual contagion – a murderer and thief of no redeeming quality known as Sanni Abacha, one whose plunder is still being pursued all over the world and recovered piecemeal by international consortiums – at the behest of this same government which sees fit to place him on the nation’s Roll of Honour! I can think of nothing more grotesque and derisive of the lifetime struggle of several on this list, and their selfless services to humanity. It all fits. In this nation of portent readers, the coincidence should not be too difficult to decipher.