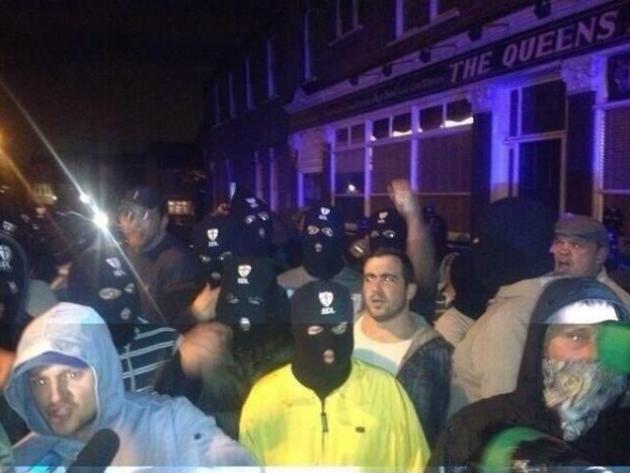 NewsRescue– The English defense League [EDL], the hate-group thugs of Britain’s most violent football gangs have gone on rampage, attacking Mosques and Muslims and getting into clashes with the police, in the aftermath of the killing of a British soldier by two men believed to be Muslim.

The EDL is a group of far right extremist Caucasian terrorists, that has for a couple of years, been launching campaigns against and harassing Britain’s Muslim population.

Members of the group at rallies sing songs like, We had joy, we had fun, we had Muslims on the run.’

And the image below from DailyMail shows a Muslim woman intimidated by the group members while on a bus at a Manchester Protest, 2010. 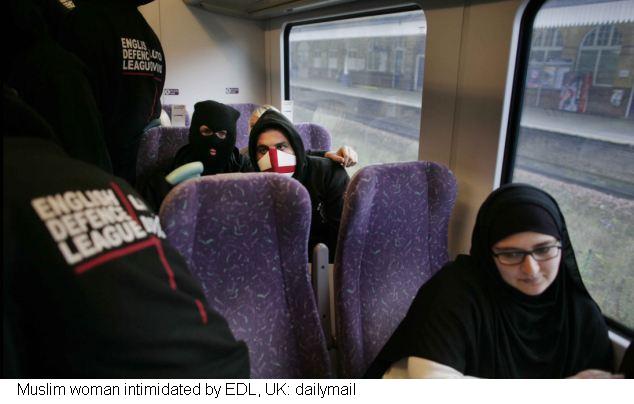 A large number of members of the hate group showed up near the scene of the killing Wednesday night, U.K. time, and are seen in photos posted on Twitter wearing black ski masks bearing the “EDL” logo and bright-yellow jackets. Reports suggest the gathering isn’t going down peacefully.

English Defence League members threw glass bottles and other “missiles at police in Woolwich,” as 75 to 100 men gathered near the attack site, leading police to try to control them with batons, Sky News reported Wednesday night. The Daily Mail reported that EDL leader Tommy Robinson was in attendance at the rally.

The response by the EDL came as the group issued the following call to action via its official Twitter account: “ANY EDL MEMBERS TAKE TO THE STREETS IN YOUR LOCAL TOWN/CITY TAKE A STAND !!!!!!”

Already a man has been arrested in Braintree Wednesday night for allegedly attempting to commit arson against a Muslim prayer center and knife possession in the wake of the murder of the soldier, according to EADT 24.

Wednesday, two young men were captured on video slaying a British soldier. They gave “interviews,” in which they explained that this was war against the British government for what they do in Muslim lands. The men were shot by UK police. One remains in critical condition, while the other is dead. See:Michael Adeboloja “Mujahid,” Nigerian Convert, One of Woolwich Hacking Attackers
—-

Update,7pm GMT- Sources close to the family allege that Micheal Adebolajo was well known to domestic and international intelligence agencies. He was on the MI5 watch list. He recently traveled to Kenya and went missing before intelligence reportedly went to fish him out. The sources also describe a recent history of violence including appartment thrashing and stabbing the past year. These intelligence misses are similar to those made by the FBI in the US Boston bombing case where, there is enough information to possibly warn and protect the public but law enforcement hsitates.