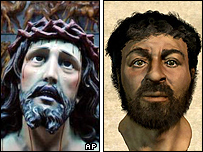 Jesus has been named the top black icon by the New Nation newspaper. Their assertion that Jesus was black has raised eyebrows in some quarters – so what colour was he?

Just as no one will ever produce proof for the existence of God, the question of Jesus’s colour may always be a matter for personal belief.

Was he white, white-ish, olive-skinned, swarthy, dark-skinned or black? There are people who believe he was any one of those shades, but there seem to be only two things about the debate that can be said with any degree of certainty.

First – if the past 2,000 years of Western art were the judge, Jesus would be white, handsome, probably with long hair and an ethereal glow.

Second – it can almost certainly be said that Jesus would not have been white. His hair was also probably cut short.

Yet the notion that Jesus was black – highlighted this week in a survey of black icons by the New Nation newspaper which ranked him at number one – is genuinely held by some. One school of thought has it that Jesus was part of a tribe which had migrated from Nigeria.

And Jesus probably did have some African links – after all the conventional theory is that he lived as a child in Egypt where, presumably, his appearance did not make him stand out.

The New Nation takes it further: “Ethiopian Christianity, which pre-dates European Christianity, always depicts Christ as an African and it generally agreed that people of the region where Jesus came from looked nothing like Boris Johnson,” the paper says. As light-hearted evidence that Jesus was black, it adds that he “called everybody ‘brother’, liked Gospel, and couldn’t get a fair trial”.

But the truth, says New Testament scholar Dr Mark Goodacre, of the University of Birmingham, is probably somewhere in between.

“There is absolutely no evidence as to what Jesus looked like,” he says. “The artistic depictions down the ages have total and complete variation, which indicates that nobody did a portrait of Jesus or wrote down a description, it’s all been forgotten.”

Dr Goodacre was involved in the reconstruction of a Middle Eastern first century skull for the BBC’s Son of God programme in 2001, which resulted in a suggestion of what a man like Jesus might have looked like. He advised on hair and skin colour.

“The hair was the easiest – there’s a reference in Paul which says it’s disgraceful for a man to wear long hair, so it looks pretty sure that people of that period had to have reasonably short hair. The traditional depictions of Jesus with long flowing golden hair are probably inaccurate.”

Deciding on skin colour was more difficult, though. But the earliest depictions of Jews, which date from the 3rd Century, are – as far as can be determined – dark-skinned.

“We do seem to have a relatively dark skinned Jesus. In contemporary parlance I think the safest thing is to talk about Jesus as ‘a man of colour’.” This probably means olive-coloured, he says.

Professor Vincent Wimbush, of California’s Claremont Graduate University, who is an expert on ethnic interpretations of the Bible, says the matter of the historical colour of Jesus seems to him a “flat, dead-end issue”.

“He’s of Mediterranean stock, and it’s quite clear what that means. We see people like that in the world today, and that should end the matter.” The fact that the debate rages on regardless is fascinating, he says, because of what it says about people’s other issues.

The artistic representations of Jesus which are so familiar are not necessarily a negative thing, Dr Goodacre says. There is “theologically something quite profound” in the fact that throughout history people have tried to depict Jesus in their own image.

“Things have changed a bit in recent culture because people are conscious of the need to be challenged by him and shocked. I think that’s why in more contemporary representations, even those coming from a white, western background, people will think very carefully about the representation.”

Even the world of film is catching up, albeit slowly. Robert Powell had famously piercing blue eyes in Jesus of Nazareth in 1977. And although Jim Caviezel, who played the lead in Mel Gibson’s The Passion of the Christ, also has piercing blue eyes, by the time the film was shown they had miraculously become brown.

Here is a selection of your comments.

I’ve heard that the misconception surrounding the length of Jesus’ hair comes from western artists confusing the term “Nazarene”, which denotes the hometown of Jesus, with the term “Nazarite” which was a name given to those to took a religious vow to abstain from such things as wine, and from cutting their hair.
Doug Jennings, West Dundee, IL US

Does it matter what colour Jesus was? He was Jewish, so would bear the colour of a Middle-eastern person. People like to see icons represented in their own images, so it came about that ‘God created man in His image.’ That image is open to interpretation according to who the believer is.
Patsy Langley, Feltham, Middlesex, England

The MAN was African, no doubt. Revelations reference “for his feet shone like Bronze” says it all.
Jazz Vilakazi, Cape Town, South Africa

There is a church in Lucca, Italy that claims to be the most lifelike representation of Jesus on the cross. In this he is clearly dark skinned. I’ll go with that option.
Stephen Higgins, Oxford, UK

The whole point of there being no visual record of the appearance of Christ, is that theologically it makes him an Everyman. He was without doubt Jewish in appearance, but with no literal data to go on, people envisage him personally, and this helps endear him to the individual. Is Jesus black? Of course! Is he white? Certainly! Is he Asian, Oriental, Arabic, Latino, Aboriginal or Native American in appearance? Yes… without a doubt… and that is how it should be!
Nick Payne, Alcester, Warwickshire, UK

Jesus was of Jewish parentage and so was clearly of semitic appearance. For the Church artists of the miidle ages to depict him as a Jews when Jews were so despised, would have been unthinkable, hence the the Aryan look.
Jon, London

I’ve never understood why people depicted Jesus and Mary as white, and Mary as a blonde! It seems obvious to me, given what part of the world they supposedly came from, that they would have had dark skin and hair. And yet artists so often seem to ignore this totally…it doesn’t make sense to me.
Esther, Cambridge

It does not matter what colour skin Jesus had,it was the man inside that mattered.
Bernard Wighton, London

In my opinion, I think Jesus was black. From the perspective that he was brought to Africa when he was a baby and he did not appear to be odd. Also from the angle that he was a Jew and some Jews are black. Essentially is that there is no tribe on earth that is white in the real sense of the word white.
Prince Peterson Odiase, Ekpoma, Edo State, Nigeria

Christianity is often seen as a “white man’s religion” which we westerners have tried to shove down the throats of all and sundry who are “not like us”. It’s funny that its origins lie in the middle east with a bloke of questionable colour but definitely not white! Actually white people definitely fall into the category of gentiles (non-jews) – and it took a great debate to decide whether or not to invite gentiles into the church at all! And we’re surprised when the African and Asian churches want to send missionaries to the UK! Bring them on – we’ve got a lot to learn!
Dan O’Brien, Newquay, Cornwall

It’s utterly disheartening to know that this is still something people debate. Really, does it matter? Why is colour relevant, does it somehow lessen or heighten the impact Jesus has had on the world if he’s black? The sooner people give up on the notion that people can be divided by colour, the sooner we move a little closer to deserving our sense of self-importance. If we can’t, then there’s always the option of going back to living in the trees.
Brendan Smith, Sheffield