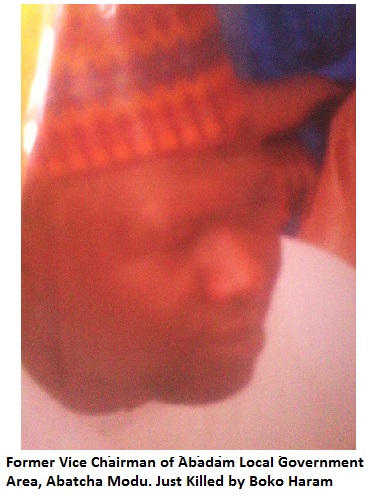 Someone claiming to be the Secretary of the Boko Haram spoke this morning to VOA Hausa Service and this was followed by a directive by the Army Chiefs that the Nigerian Army should comply because Government and Boko Haram have agreed to cease fire.

However, reports coming in today have indicated that the dreaded, unforgiving and tormenting group, Boko Haram have brutally killed the former Vice Chairman of Abadam Local Government Area in person of Abatcha Modu with three other occupants of his car – there are more lies than truth in this cease fire.

Is the Nigerian military once again proceeding along the Boko Haram sponsorship path of ex-general Azubuike Ihejirika who always fought Boko Haram just a little and left them when he could have defeated them to allow them recover and forcibly recruit thousands more innocent local youth to train as a new army to be killed later in a continuous northeast de-population pogrom cycle?

Our reports find that under the same phony cease fire, four (4) innocent villagers were killed this morning by the same members of Boko Haram in Yau Village of same Abadam Local Government Area.

The Federal Government is in a hurry and trying to deceive the world and give fake glory to Goodluck Jonathan ahead of 2015, by seeking a cease fire with these terrorists, rather than crushing them and fighting this evil to conclusion.

Bama, Gwoza, Marte, Ngala, Konduga and Dikwa are still under full control of Boko Haram yet Nigeria’s military plans to agree for these areas to be lost to the terrorists in this “cease-fire,” as though the northern people are senseless and do not deserve to return to their villages and lives.

And what is the purpose of the $1 billion borrowed to fight Boko Haram, our analysts asked? Most have suggested that this money is for the 2015 presidential election and not to fight Boko Haram. Is the money being given to bribe Boko Haram to release the remaining abducted girls, alone, and to cease fire temporarily while the Jonathan leadership plans to leave Boko Haram in situ, to remain in the captured territories under a cease-fire arrangement so after he wins re-election then they can continue their sponsored mission to destroy the north?

Why is the Nigerian military under Maj Gen Kenneth Tobiah Minimah, from Bayelsa even discussing a cease fire with these rag-tag bandits when Nigeria has the upper hand? Is this not treason?

Our sources tell us that Goodluck Jonathan is under a lot of international pressure not to dare contest unless he can resolve the terror situation. It is obvious with this deadly and deceptive “cease-fire” that he took a $1 billion loan to bribe and buy peace till February 14th 2015 and not to destroy Boko Haram and free the occupied north.