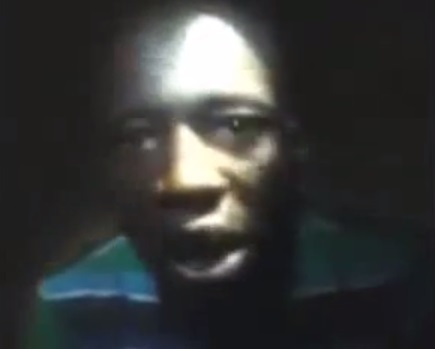 Yesterday, three members of the insurgents group, Boko Haram, who partook in recent attacks and killings around towns and villages of Borno State, were arrested at a refugee camp in Maiduguri where they were faking to be part of IDPs from Baga, LEADERSHIP Weekend reports.

One of them who agreed to squeal said he was never a lover of the sect until he was forcefully conscripted into the sect through diabolic means.

The Civilian-JTF operatives deployed to provide security for the arriving displaced people of Baga after the terrorists had sacked them last week said the Boko Haram terrorists joined other IDPS to enter Maiduguri with the intention of spying for their colleagues in the bush.

Gambo Muhammed, a 27-year-old native of Gaya in Kano State who was born and brought up in Malumfatori, confessed that he had killed “only six people” since he was forced to join Boko Haram last year.

He was arrested amongst the fleeing residents of Baga whose town was taken over by Boko Haram last week. Over six thousand residents of the seized fishing community were forced to flee their homes into Maiduguri in the last five days.

Gambo Muhammed was fished out by another conscripted but non-combatant Boko Haram member who was helping the Civilian-JTF to identify members of the sect that may have disguised as IDPs.

According to the scraggy looking arrested Boko Haram member, he was forced to join the Boko Haram sect after some members of the group threatened him and several others with death upon them and their family should they refuse to pick up arms and fight against non-members.

“I and over 40 other young men were forced to become Boko Haram members in Baga town when Boko Haram gunmen came to round us up in the mosque,” he said.

“When we were taken to a bush camp near Konduga we were given some water that was used to wash off some Arabic inscription from a wooden tablet, and we were also given a fresh date that was rubbed with some substance to eat. After eating mine, I felt some internal heat, and then I began to sweat profusely; that was all that I could remember and I became a full member of the sect doing everything other members were doing including killing people.

“I killed only six people…and I swear it was not more than that figure; in fact I was even forced to do it when we went to Konduga and we wanted to forcefully take some people’s livestock of which the owners said they won’t allow us go with them even if it was for the purpose of doing “God’s job. So, one of our leaders asked me to step out with my gun and ordered me to kill the people and he warned that if I refused to do as commanded, they would shoot me. So I had to shoot them all,” he said.

Gambo was arrested alongside two others who at the time of the interview had refused to speak even though they had earlier acknowledged that they were Boko Haram members who had participated in several killings including the recent Baga attack.

Provost of the Civilian-JTF, Lawan Zanna, who led the team that arrested the three Boko Haram suspects said his team had so far arrested about 270 of such Boko Haram members who would join the IDPs to the camp either to escape being arrested or as spies.

He said the three arrested Boko Haram members are still being investigated with a view to revealing where some of their members who may have sneaked into the state capital could be fished out.