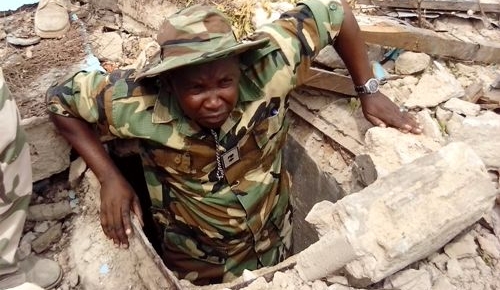 Borno State government has begun the fumigation of areas within Maiduguri, the state capital which were formally under the Boko Haram sect but were reclaimed by the Joint Task Force (JTF) early July. Some of the areas include Budum, Kofa Biyu, Shehuri, Abbaganaram, Gwange and old Maiduguri.

Daily Trust reports that at the peak of the insurgency, residents of these areas fled from their homes and the areas were taken over by the insurgents but are now returning to the areas. During a raid in some of the areas in early July by the JTF, scary discoveries like decomposing bodies, skulls among others were made and raised fear of an epidemic outbreak.
But during the weekend, staff of the Borno State Environmental Protection Board (BOSEPA) were seeing evacuating and clearing the drainage and also fumigating all the streets. The state deputy governor, Alhaji Zanna Umar Mustapha who visited the areas at the weekend said “As you can see life has returned to Maiduguri and those who fled these areas who were dens of the Boko Haram have returned’’.

Mustapha appealed to other residents who fled their homes to return as their security is now assured. He praised the effort of the youth vigilante and the JTF who have been collaborating to check the excesses of the insurgents.
Also some residents of the areas who spoke to our correspondent called on the state government to assist in building back their homes which were demolished during clashes between security forces and the insurgents.