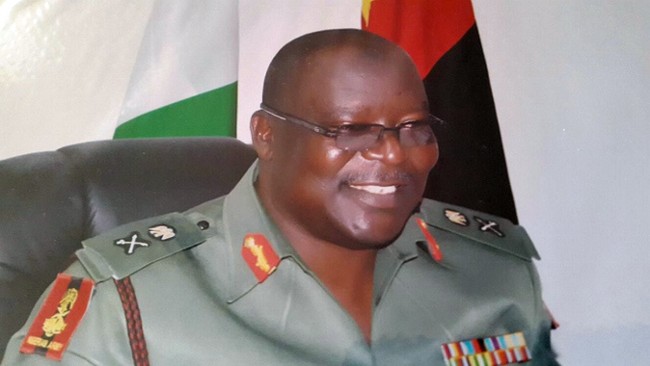 The Nigerian army has announced the death of a top General who lead the war against Boko Haram,Major General Yusha’u Mahmood Abubakar. General Abubakar was put in charge of the war in August last year.

The Nigerian Army wishes to inform the public of the involvement of its Chief of Training and Operations (Army), Major General Yusha’u Mahmood Abubakar and the Acting General Officer Commanding 3 Division Nigerian Army, Brigadier General MSA Aliyu in a road traffic accident along Maiduguri-Damaturu road today. Regrettably, we lost Major General Yusha’u Abubakar at the incident, while Brigadier General Aliyu sustained some injuries and is receiving treatment.

There have been a series of deadly auto accidents of top Nigerians the past couple of days. Junior labour minister Ocholi, his wife and son all died in one of the recent accidents.

A fresh statement by the army reads in part: “The attention of the Nigerian Army has been drawn to the Tuesday 26 January 2016 publication by Daily Trust and The Nation newspaper alleging that the former Commander Operation Lafia Dole, Major General Yushau Mahmood Abubakar has been linked to the $2.1 billion Arms Deal by the EFCC and properties belonging to him and his wife have been sealed off by same anti-graft agency.

To which the Nigerian army released this statement in his defense:

“It is expedient to inform that Major General Yushau Mahmood Abubakar is the immediate past Theater Commander of Operation Lafia Dole established by the current Chief of Army Staff to combat terrorism and insurgency in the North East and was recently appointed Chief of Training and Operations at the Army Headquarters as a result of his excellent performance in the theatre of war. Your publication therefore did not only misguide the public but constitutes monumental embarrassment to the Nigerian Army, the senior officer and his family.”