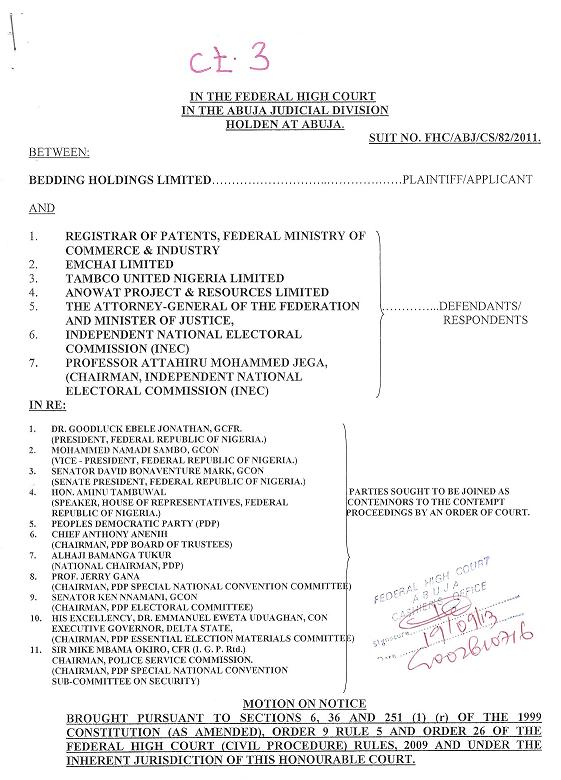 A Federal High Court in Abuja will next Monday (September 30) hear an application seeking to join President Goodluck Jonathan, nine other key members of the People’s Democratic Party (PDP) and the party in a contempt suit pending before the court.

The information is contained in the hearing notices served on them last week by court’s officials, a copy of which was sighted in Abuja.

President Jonathan and others, cited as alleged contemnors in a joinder application filed by a firm, Bedding Holdings Limited (BHL), are accused of alleged unlawful use of patented ballot boxes for the party’s last special convention, without the consent of BHL, which is the patent owner.

The application earlier filed on September 9 was refiled last week to include other major actors in the PDP’s special convention held in Abuja on August 31 this year.

The application specifically seeks an order joining President Jonathan and 10 others in “the contempt proceedings already commenced by plaintiff/applicant.”

Those sought to be joined include the Vice President, Namadi Sambo, Senate President, David Mark, Speaker, House of Representatives, Aminu Tambuwal, the PDP and its Chairman, Bamanga Tukur.

Also to be joined include the Chairman, PDP’s Board of Trustees, Anthony Anenih, Governor Emmanuel Uduaghan of Delta State (who acted as Chairman, PDP Essential Electoral Materials Committee) and Chairman, Police Service Commission, Mike Okiro (who served as Chairman, PDP Special National Convention Sub-Committee on Security) and the party.

The application was filed for BHL by its lawyer, John Okoriko of the firm of Karina Tunyan (SAN) and Co, following the earlier issuance of a Form 48 on the alleged contemnors.

The applicant said the application was informed by its realisation that the 11 alleged contemnors were “necessary and desirable parties” to the contempt proceedings.

BHL stated that the ground for its application was that Jonathan and others “are serial contemnors, who contemptuously connived with sixth and seventh defendants/respondents (the Independent National Electoral Commission, INEC and its Chairman, Professor Attahiru Jega)” to use the applicant’s transparent ballot boxes for the PDP’s convention in violation of a subsisting judgment of the court delivered on June 5, 2012 by Justice Adamu Bello.

It argued that except Jonathan and others were joined in the case, in view of “the pivotal role” they played in the disobedience of a valid and subsisting court judgement, the contempt proceeding would not be “effectively and effectually determined.”

BHL’s Group Executive Chairman, Chief Sylvester Odigie stated, in a supporting affidavit, that his company had initiated the contempt proceedings against INEC and Jega on July 18, 2012 via a motion on notice, seeking an order committing the two to prison, for their alleged contemptuous use of the ballot boxes for all the elections they have conducted since the June 5, 2012 judgment.

He cited some of the elections for which the ballot boxes were used, without his company’s consent, to include the last governorship elections in Edo and Ondo states, and other elections conducted subsequently by INEC.

He stated that those being sought to be joined in the contempt case, were seen casting their votes at the August 31 convention, using his company’s patented ballot boxes.

Odigie queried the legality of the outcome of the convention in view of some reliefs granted by the court in the June 5, 2012 judgment in suit No: FHC/ABJ/CS/82/11.

“By virtue of reliefs 6 and 7 as contained in the enrolled judgment order, the elections of the PDP conducted at its special national convention held on August 31, 2013 in Abuja is unconstitutional, illegal, unlawful and therefore stands null and avoid,” Odigie stated.
He argued that the outcome of the convention stands nullified because his company’s ballot boxes were used without its consent, in violation of the court’s judgment.

Relief sixof the judgment states that “any action or actions whatsoever and howsoever taken or purported to have been taken by the defendants relating to the said products without the prior and express license, consent, authority and/or approval of the plaintiff is unconstitutional, illegal, unlawful and is therefore null and void.”

The judge upheld BHL’s claim to being the bona fide patentee and the exclusive owner of the invention named “Transparent Ballot Boxes” on which it was issued certificate of registration patent rights No. RP12994 and registration of industrial designs rights No. RD5946 by the Registrar of Patents on January 12, 1998.

Justice Bello also upheld the subsequent certification of an improvement on the invention named “Electronic Collapsible Transparent Ballot Boxes” (with certificate of registration of patent rights No. RP16642 and registration of industrial designs rights No. RD13841 issued on November 27, 2006 which are still valid.

The judge voided the rights over similar inventions purportedly issued later, to three firms – Emchai Limited, Tambco United Nigeria Ltd and Anowat Project and Resources Ltd – by the Registrar of Patent, for being illegal.

Justice Bello also granted an order of perpetual injunction restraining the defendants and any other person from utilising or dealing with the patented boxes of the plaintiff “except with the express and prior consent, license and authority of the plaintiff to that effect.”

Defendants in the suit were the Registrar of Patent, Federal Ministry of Commerce and Industry, Emchai Limited, Tambco United Nigeria Ltd and Anowat Project and Resources Ltd, Attorney General of the Federation, INEC and Jega.

Emchai applied to the court on June 28, 2012 for an order setting aside the judgment.

On September 27, 2012 INEC and Jega equally applied for an order staying execution of the judgment pending the determination of their appeal.

Justice Bello, in a ruling on May 13 this year, dismissed the applications by Emchai, INEC and Jega for lacking in merit.

The judge, also in the ruling, scolded INEC and Jega for utilising the same ballot boxes for the Edo and Ondo elections in disregard of the court’s subsisting judgment.