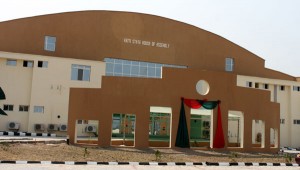 Seven Peoples Democratic Party (PDP) members in the Ekiti House of Assembly have elected Honorable Dele Olugbemi as the new Speaker of the House.

Meanwhile, 19 other lawmakers elected on the platform of the All Progressives Congress (APC), including the substantive speaker, Adewale Omirin, were absent from the proceedings as they gather in Lagos to host World Press Conference.

Omirin, condemned the action of the seven PDP lawmakers, describing it as illegal and abuse of the constitution.

Omirin, however reiterate that he still remains Speaker of the Ekiti House of Assembly.