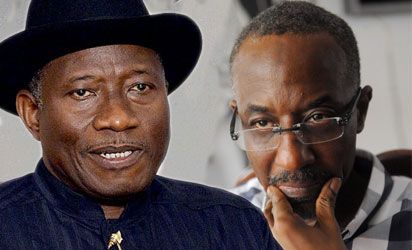 The $43,449,947, £27,800 and N23,218,000 recovered by the Economic and Financial Crimes Commission (EFCC) from an Ikoyi apartment in Lagos was a discreet allocation released to the National Intelligence Agency (NIA) for major but covert security projects, PREMIUM TIMES has learnt.

The total value of the money at the Central Bank of Nigeria official exchange rate is over N13 billion.

Presidency and security sources told this newspaper on Friday that former President Goodluck Jonathan approved the funds for the 30-year old secret service agency after its immediate past Director General, Olaniyi Oladeji 2009 – 2013 (October, 2013), alerted him to the need for some “crucial and covert security projects”.

The funds were later released in cash directly from the Central Bank of Nigeria as a way of making its spending completely secret, this newspaper was told.

“The projects are scattered across the country, but there is a major one in Lagos being funded with the cash warehoused in the Ikoyi building,” one source said. “The spending on the projects cannot be subjected to the usual expenditure process, and that is why the funds are held in cash. If you like, you can call it illegal projects in the national interest.”

Our sources said only relevant top government officials and of the NIA are aware of the projects.

One official said when the incumbent Director General of the NIA, Ayodele Oke, was alerted that EFCC operatives had swooped on the apartment, being discreetly guarded by covert operatives, he rushed to the anti-graft agency’s headquarters in Abuja to advise its chairman, Ibrahim Magu, to withdraw his men as the funds belonged to government.

At the time, about 13 police officers and some soldiers, accompanied by photographers and videographers, had broken into the apartment, and were already dismantling the safes in which the funds were concealed, our sources said.

Mr. Magu however declined Mr. Oke’s request. Instead, he directed his men to proceed with the operation. those familiar with the matter said.

A frustrated Mr. Oke was said to have rushed to the National Security Adviser, Babagana Monguno, and Vice President Yemi Osinbajo to complain about Mr. Magu’s attitude, and the huge embarrassment he had caused his otherwise extremely quiet and secretive agency.

Those who saw the NIA DG before he was called in to see the president said he had two bulky envelopes believed to contain paper and audio-visual records of the security projects.

Officials said President Buhari has since directed Mr. Magu to forward to him detailed report on the operation. The EFCC boss was also directed to immediately deposit the funds with the CBN.

On his part, Mr. Oke was asked to properly document his complaints against Mr. Magu, and then reapply for the seized funds, our sources said.

A top presidency source said the President might ask Attorney General Malami to review reports submitted by the two officials, and then forward appropriate recommendations.

When contacted Friday, the Special Adviser to the President on Media and Publicity, Femi Adesina, said, “It’s a security issue, and not strictly a presidency issue.”

He directed further enquiries on the matter to the security agencies involved.

Mr. Oke of the NIA confirmed to PREMIUM TIMES that the money belongs to his agency, but declined further comments when asked what the funds were meant for.

“You don’t expect me to tell you that,” he said.

Contacted Friday, the spokesperson for the EFCC, Wilson Uwujaren, said he had not been briefed on the matter.

Attorney General Malami did not answer or return calls.

The EFCC had on Wednesday recovered the huge cash from an Osborne Street, Ikoyi apartment in Lagos, believing it was looted.

The anti-graft agency said it acted following a tip from a whistle-blower.

In a ruling on Thursday, Justice Muslim Hassan ordered a temporary forfeiture of the money to the government.

He adjourned further proceedings to May 5 for anyone interested or wishing to claim the money or make a case why it should not be permanently forfeited to government.