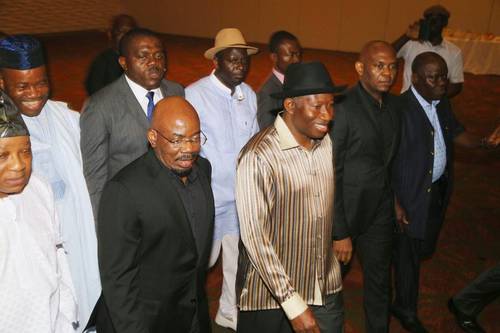 What are you guys doing here…Did I invite you people? – Buhari

Time was, when phantoms in scarlet persistently passed as men of honour while the righteous faded in obscurity or lay spent in trenches of blood. Hence it was no surprise that Nigerian businessmen, Jim Ovia, Tony Elumelu, Wale Tinubu and Godwin Emefiele, Governor of the Central Bank of Nigeria (CBN), in desperate bid to dig their claws into President Muhammadu Buhari, bought first class tickets and flew after him to the United States of America.

But the snag was, they were uninvited; even so, they embarked on a desperate quest to establish themselves as Nigeria’s top businessmen and cronies of the incumbent president. Back when Goodluck Jonathan was president, they would have gotten away with such brazen disregard for protocol; in fact, they would have constituted a crucial part of the former president’s travel plans. But a new sheriff is in town and the businessmen are yet to get with his programme.

Thus they had sheepishly gone to attend a meeting with Buhari in America and Buhari on sighting them reportedly asked, “My friends, what are you doing here? Did I invite you people? You are not needed here,” “Godwin, I know you brought them.” Buhari allegedly told them. Shamefacedly, they gathered their folders and left the meeting. Their steps became very heavy as they trudged out of the venue.

It was indeed a big disgrace to these businessmen who once formed a ring around the former President Jonathan. They quietly left the venue with their tails and gargantuan pride tucked between their legs.

All around the world, presidential politics has always been a game of the wealthy, for the wealthy and by the wealthy. Men of means have always had a say and in several instances, determined the course of political and socioeconomic affairs in the country. This becomes imperative in their desperate bid to establish their dominance and affluence sustainably. The need to maintain their controlling grip on their country’s economy, rather than ensuring that the nation’s commonwealth is equitably distributed has always been the only ideological and selfish motive driving their political participation.

Consequently, the superrich of the nation’s high society are continually seen as the arrowheads of plots and movements to institute and sustain political hegemony via a puppet leader or party. Political pundits are of the opinion that the President Buhari needs to stay away from these men and women who have perfected the knack for soiling the hands of any President and sullying the his administration by their self-serving pursuits which often manifests devastatingly on the lot of the citizenry and to the detriment of the country.