Nigeria’s constitution is clear and unambiguous on the deployment of the military to police the state. The role of the army is for external conflict. The army can only be deployed to assist the police under approval of the Assembly. Without obtaining such approval, any deployment is unconstitutional.

As we have repeatedly emphasized, it is the duty of the “civil authorities”, the police to address all internal eruptions within the state under democratic rule.

Section 217 of the 1999 constitution gives the role of the army: 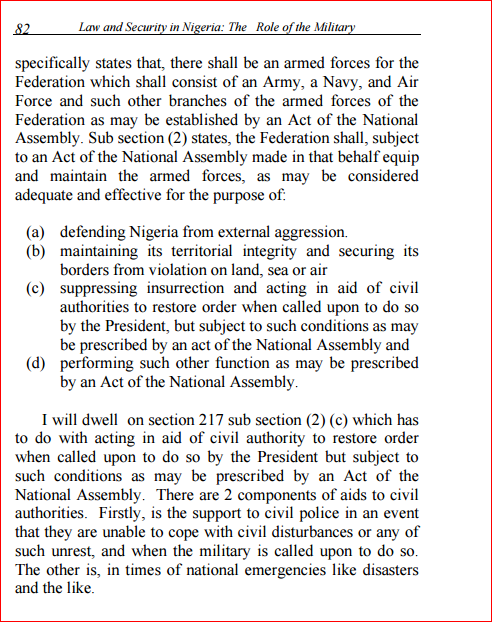 Subsections “c” and “d” depend completely on an approval by an “act of the National Assembly.”

The reasons for this protection are easy to understand. A civil and democratic society must be protected from becoming a Police and Totalitarian state. There are limits to the powers of the president of which deployment of the army is one. The army stands behind the police as it lacks the tools and training for addressing issues of state policing.

Buhari’s reign has been marked or marred by several frank violations of the law with junta style military deployment which have been characterized by massacres and secret burials north and south of which the one happening now at the residence of IPOB separatist leader Nnamdi Kanu, is just the latest.

The 2015 Zaria massacre with the secret burial of hundreds of civilians as admitted by the Kaduna state government and the 2016 Onitsha massacre and secret burial of dozens of pro-Biafrans are two examples from the past Buhari years.

It is the duty of conscientious Nigerians to call Buhari and military chief Buratai to order. No Nigerian is above the law. The constitution must be respected at all times and by all.

As citizens of this country it is our duty to defend the law and fight for the rights of fellow citizens who are victims of tyranny and brutality today because tomorrow may be our turn.

We are therefore reporting this latest infraction to all international bodies to reign in on the Buhari government before more lives are lost and more secret mass graves are dug.