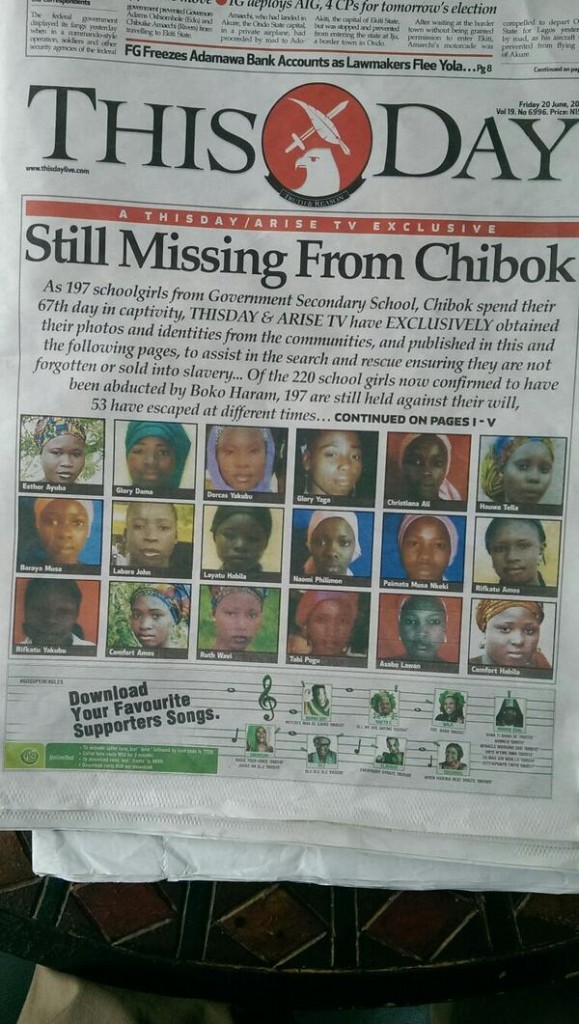 The Presidential Fact-finding Committee on the abduction of the schoolgirls in Chibok, Borno State, in its report submitted to President Goodluck Jonathan last Friday indicted the military for the kidnapping of 276 female students from their school.

According to a source on the committee, the report by the committee led by Brigadier-General Ibrahim Sabo (rtd), came down heavily on the military for not responding to intelligence reports before the attack on the Chibok community and the abduction of the schoolgirls over 70 days.

The committee, which advised the federal government to keep its report classified for the sake of national security and so as not to jeopardise the release of 219 schoolgirls who remain in captivity, also said in the report that the military also failed to respond to the attack on Chibok because the soldiers were ill-equipped and ill-motivated.

Also, contrary to expectations, the fact-finding committee absolved the Borno State Government of complicity in the kidnapping of the schoolgirls and failure to provide security at the Government Secondary School, Chibok, on the day of the attack as it was one of the five designated centres in Borno State for the West African Examination Council School Certificate (WAECSC) that was holding at the time.

The source on the committee further revealed that the report stated that apart from the 219 girls that remain in captivity, 57 who had at different times escaped, two policemen were also kidnapped on the night of April 14.

He said the report, however, stated that the two policemen who were kidnapped alongside with the girls had since regained their freedom when security forces attacked a village said to have been occupied by the Boko Haram sect.

When contacted on the issue, the Senior Special Adviser to the President on Public Affairs, Dr. Doyin Okupe, refused to discuss the report of the fact-finding committee, stating that it was a classified document and could not be commented on.
He explained that he was unaware of the findings of the committee report and as a result, could not deny or confirm inquiries.

However, a presidency source denied that two policemen were kidnapped alongside the girls, stating that the report of the committee never made a reference to policemen.

The committee was inaugurated by the president a few weeks after the abduction of the schoolgirls.

Its terms of reference included to liaise with the Borno State Government and establish the circumstances leading to the school remaining open for boarding students when other schools were closed; and to liaise with the relevant authorities and the parents of the missing girls to establish the actual number and identities of the girls abducted and to interface with the security services and the Borno State Government to ascertain how many of the missing girls had returned.