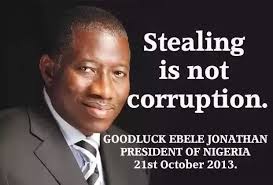 The only ignorant people in Nigeria are Jonathanians. How dare you tell me that a man who asserted that ‘STEALING IS NOT CORRUPTION’ is willing to fight corruption? GEJ is surrounded by criminals. Take a look at the composition of his Presidential campaign team, the DG is Dr. Ali – Former PDP national chairman whose son is ‘supposedly’ standing trial for embezzling fuel subsidy funds; Fani-Kayode (Director, media and publicity), wanted for embezzling aviation funds. Do you want me to mention Mu’azu, a man who was indicted for embezzling N18bn of Bauchi state money? What about Anenih, a man who embezzled N300bn during his tenure as minister for works? What about Tukur’s son, one of the ring leaders in the fuel subsidy fund scam? Have you forgotten Oteh, Stella Oduah and Allison Madueke? Hehehe. . . China with all her technology still jails corrupt public officials. Does the name Boo Xi Lai ring a bell in Jonathanians’ ears? How about the corrupt police man in China that was captured by CTVV on the high way wearing expensive wrist watches that his monthly salary wouldn’t afford huh? Even God has a prison for corrupt men – i.e HELL FIRE. You fight corruption by blocking the loop holes and sending corrupt people to jail to serve as a deterrent to others. GEJ is a shamelessly corrupt moron who can only cajole fellow morons like himself with his immoral teachings.