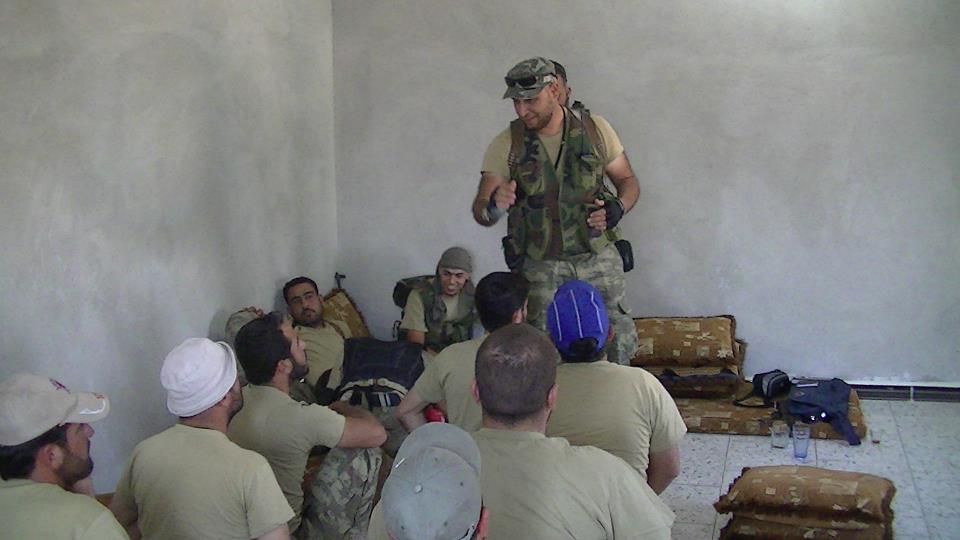 CIA’s Hired Global Mercenary Commandos: al-Harati, from Libya to Syria; You Up Next?

NewsRescue– Far from being spontaneous and organized by the locals, the fall of Libya was a strategically organized, thoroughly planed and facilitated covert military operation, with fight foreign commandos, leading almost all fight squads.

For Libyans, the revolution, if there really was any intended was totally highjacked. The elite team of global CIA commandos are not new. It is the old game in the book. The Osama Al Qaeda elite team used against the Soviets in Afghanistan has been publicly recognized as a CIA created machine.

A top director of the new elite command is Al-Mahdi al-Harati, born 1973, an Irish national who lived the last 22 yeas of his life in Ireland before leading the Benghazi armed overthrow of the Libyan regime. Al-Harati is recognized as the new ‘Osama’,-  trained, funded and aided to lead covert successful militant campaigns of terror and destabilization in troubled Arab and African nations, that are not in the Wests good books.

Al-Mahdi al-Harati was actively recruited sometime in 2011 and fully funded by the CIA, according to heaping evidence, to lead much of the military Benghazi campaign against Libya’s leadership. Though it is generally understood that he has long been a CIA agent, in active duty and training.

Al-Harati’s CIA employ was verified by intelligence experts, when he was robbed of ‘€200,000 CIA money’ in 2011. It must be noted that these destabilization and overthrow efforts are highly funded and cash based. Mercenaries are hired to fight these wars – made to appear as though the people are fighting, and they are paid tall sums, in hundreds to thousands of dollars per day of fight, on average $500-800/day.

BATTLEZONE: Mahdi al-Harati helped to lead the assault on Tripoli which ultimately resulted in the fall of Sirte.

A GANG of Irish traveler thieves are in the middle of a holy war – after liberating €200,000 cash destined for Libyan ‘rebels’. In a tale worthy of the John le Carre thriller Tinker, Tailor, Soldier, Spy, the scam artists from Rathkeale in Co Limerick hit the jackpot when they robbed a home in Dublin’s Firhouse.

As well as a haul of family jewels, they stumbled upon €200,000 in €500 bills hidden in the hot press. But the homeowner was well-known Irish Libyan ‘freedom fighter’ Mahdi al-Harati, who was one of the leaders of the bloody ‘revolt’ against Gaddafi.

The Sunday World asserted al- Harati’s being a CIA asset based on his statements after the robbery of his fat earnings:

“[After the robbery], astonished officers made contact with Mahdi al-Harati who told them that he had traveled to France, the United States and Qatar the previous month and that representatives of an American intelligence agency had given him a significant amount of money to help in the efforts to defeat Gaddafi. He said he left two envelopes with his wife in case he was killed and took the rest of the cash with him when he went back to Libya.”

Mahdi al-Harati has been well-known in antiwar and Palestine solidarity circles in Dublin over the years . He had been a passenger in the Challenger 1 ship last year when it attempted to break the seige of Gaza as part of the Free Gaza  Flotilla . He was the last Irish member of the flotilla to arrive home after the Israeli raid and was given a hero’s reception at Dublin Airport by members of the IPSC and the IAWM . According to an indymedia comment from last year written by Kev from the IPSC :

“Freda Hughes of the Ireland Palestine Solidarity Campaign welcomed his safe return and saluted his bravery: “Al Mahdi, like all of the Freedom Flotilla participants, is deserving of our praise for his courage in attempting to break the illegal siege of Gaza and deliver humanitarian aid to the besieged people there. We are all relieved that he is safely back in Ireland. We hope that his family, who we know were extremely worried about his health, can rest easy now and celebrate his return..”’

He is noted to have led the siege and capture of Tripoli.

The very interesting and confusing aspect of these elite commands is their being not merely the property of the CIA, but also Al Qaeda agents. The two are becoming more and more synonymous, and on some internet fora, Al Qaeda is re-branded, ‘ALL CIA duuh’.

The fall of Libya to these Al Qaeda commandos was made obvious to the world as the Al Qaeda flag was the hallmark victory symbol. It was pictured and videoed in on top of the Benghazi courthouse and in the hands of the celebrating victors.

Al Qaeda got its first official country, Libya. Since then, terror has been spreading all over North and sub-Saharan Africa, to Algeria, Mali with the regime deposition and terror rule, and up to Nigeria, where the abundance of Libyan ammunition’s and unlimited freedom, funds, training and support given terrorists by NATO support of terror commandos is leading to an upsurge in state terror.

The fall of Syria is once again being led, not by Syrians, but by the same CIA elite ‘ALL CIA duuh’, mercenaries. Al-Mahdi al-Harati  has been seen active in Syria for months and has appeared in numerous videos, organizing and leading attacks against the nations army and people.

In the video below, he was recorded staging terror ops in Syria

Few days ago, the German intelligence agency released its findings that terrorists, Al Qaeda was responsible for much of the Syria rebel activity. The Houla massacres, famed for the British BBC usage of a fake photo to distort the happenings, has been blamed on these terrorist elements, who have been in control of Houla.

Ajel news- Anti government forces in Libya, have in the recent Aleppo battle, the so-called battle of all battles, been seen burning corpses of dead comrades. This act of burning corpses is to hide their foreign identities.

Breaking News exclusive source confirmed that militants have burned this dawn 18 terrorists bodies that were killed in Jabal Al-Zawieh and Sarakeb during clashes with Syrian security forces to hide their faces.

Breaking News sources said one of the two groups leader named “Abu Issa” has threatened to kill anyone who turns himself into Syrian security forces and to target his family. Read link: http://breakingnews.sy/en/article/2271.html

The easy flow of these commandos and weapons into and out of Syria is enabled by their neighbor, Turkey, who either for ‘religious’ purpose, Syria being led by the Alawite house, as against Turkey leaderships’ co-called Sunni alliance, which is the more popular in Muslim nations.

Friday, Turkish Prime Minister Recep Tayyip Erdogan in Britain raised his fear over the assault of his commando anti-Syrian government forces, being hammered on in recent Syrian crackdowns. He called on the Arab League, International Security council and and the Arab League to support the armed rebels who use the Turkish territories as their bases and route to infiltrate Syria.

CNN in a recent article, admitted to the presence and active recruitment by al-Harati of Libyans in Syria. Stopping short of admitting the foreign powers actively behind his ability and track record, including his supreme capacity to bring down the Libyan government and now again, his monumental capacities against the Syrian government.

In their report, the mentioned the publicity of Youtube videos exposing him and his commandos in Syria. Obviously, this exposition by the peoples media has prompted a conciliatory admission by the Mainstream.

CNN- Under the command of one of Libya’s most well known rebel commanders, Al-Mahdi al-Harati, more than 30 Libyan fighters have made their way into Syria to support the Free Syrian Army rebels in their war against President Bashar al-Assad’s regime.

Al-Harati, who commanded the Tripoli Revolutionary brigade — which was the first group of rebels to enter the Libyan capital last August — has been in Syria for months leading some of his former men and Syrian military defectors who have joined his “Liwaa al-Umma” or “The Banner of the Nation” brigade.

Recent YouTube videos show at least two different Syrian rebel factions announcing that they are part of the Liwa al-Umma.

al-Harati may be coming to your town soon

The consequences of such funded global mercenaries can never be over stated. These paid fighters manipulate peoples minds to gain volunteers, and with special doctrine, developed for them, they brain wash people who have good intentions into believing that such political and capitalistic wars are divine.

In the end, we have people with amazing skill and power, al-Harati, a new Osama, and you end up with trained terror remnants, who in their inactive state, after the fall, this time, of Syria, look for where else to pick up such ‘noble’ causes. As happened in Mali, in Africa, the entire Middle East and the world at large is never going to be safe or the same again with this action against Syrian government.

Al-Harati resigned as deputy leader of the Libyan Military soon after take over and in October 2011,  returned to Ireland, where he and his Irish wife have lived for the past 20 years. He is now fully employed and engaged in leading the Syrian anti-government terror campaign. Apparently he is better engaged in commanding global terror ops, than state leadership.

And this growing army of skilled CIA commandos who have a track record of brilliant success, from the war against the Soviets in Afghanistan, to hundreds of other wars, and more recently their success against Libya’s government and now Syria, who knows, you could be up next. So be ready, al-Harati may be coming to your town soon.