What happened to the $5m withdrawn from the National Security Adviser’s account at the Central Bank of Nigeria (CBN)? The cash vanished under former NSA Col. Sambo Dasuki’s watch.

This question and more relating to other “curious” withdrawals in the dying days of the former President Goodluck Jonathan administration informed the invasion of Dasuki’s homes by Department of State Security (DSS) at the weekend.

Although Dasuki has not been linked with any cases of corruption, sources told The Nationyesterday in Abuja that his office was being investigated for alleged questionable withdrawals running into billions of naira.

It was gathered that Dasuki, the immediate past NSA to Jonathan, who President Muhammadu  Buhari sacked last Monday alongside the Service chiefs, would be quizzed on how a driver to his personal assistant disappeared with $5 million, which was withdrawn from the office’s account with the CBN.

The DSS, in a statement issued at the weekend, justified its raid on Dasuki’s home on the suspicion that he was plotting to disturb the peace with the quality and quantity of high caliber weaponry stocked in his Abuja home where bullet proof vehicles were recovered. His father’s house in Sokoto was also searched.

Although Dasuki said he was being victimised for discharging his responsibilities, a Presidency source told The Nation that evidence abound that his office played a major role in some shady withdrawals.

Dasuki’s office, the source explained, was fingered in the case of a driver to his personal assistant who allegedly disappeared with a car containing $5million cash withdrawn from the NSA office’s account with the Central Bank of Nigeria.

Dasuki was placed under security surveillance immediately Buhari was sworn in due to the role he played in the plan to truncate the handover of governance to a new government on May 29, it was learnt. 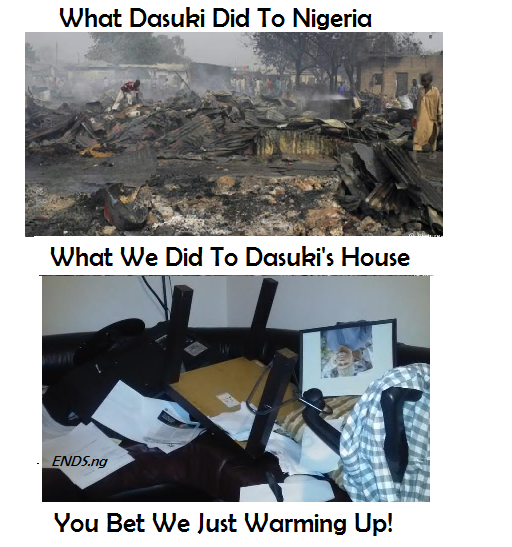 Said the source: “I believe Dasuki knows the truth and he is only latching onto the democratic environment to twist the tale. The cry of a witch-hunt is unfounded because we work in the same office. We don’t even need to go into how he purchased the Asokoro mansion few months after his appointment as NSA.

“Is Dasuki also claiming ignorance of investigation into the suspicious disappearance of a driver to his Personal Assistant with a vehicle loaded with $5m? In fact, the relatives of the driver are still asking the authorities to help look for their son. The money was withdrawn at the CBN and the PA claimed the driver said he wanted to go for lunch only to disappear with the money, which was in the boot of the car. Now, who allows a driver to go out with a vehicle containing such a huge sum of money?

“You know Dasuki is just playing for time and I think he knows the game is up. By the way, who told the former president that he could influence the sacked Service Chiefs to stage a coup and frustrate the handover date? Who championed the idea of changing the date for the election midway, having realised that Jonathan was not going to win? Who has been collecting millions of dollars to buy sophisticated gadgets and equipment to fight insurgency without any appreciable progress until the tail end of the tenure of Jonathan?”

The source also said that Dasuki cannot explicate his office from the botched $15million cash-for-weapons deal that went awry in South Africa, adding that the extension of the investigation to Sokoto was informed by the fact that the former NSA had taken full control of the house long after his father relocated to Kano before moving to London to treat an ailment.

Said the source, who pleaded not to be named because of the “sensitivity” of the matter:

“The truth is that his father relocated from Sokoto a long time ago and that house is solely being used by Dasuki. What point is he trying to prove by feigning ignorance about what he keeps in the Sokoto house? Is he saying there is no money lodged in that house or that some government vehicles were not retrieved from there? Anyway, by the time he is brought before justice, we will know whether this is frame up or not. Sometimes, it is not the noise you make on the pages of newspapers that count but how you defend your integrity”.

Dasuki in an exclusive interview with The Nation on Saturday had described the siege to his house is mere witch-hunt. He said: “It is just a witch-hunt. If you want me to make clarifications on any issue, in the spirit of democracy and the rule of Law, have the courtesy to invite me and as a gentleman, I will honour the invitation. Sending two trucks to lay siege to my house and restrict my movement is just abysmal.”