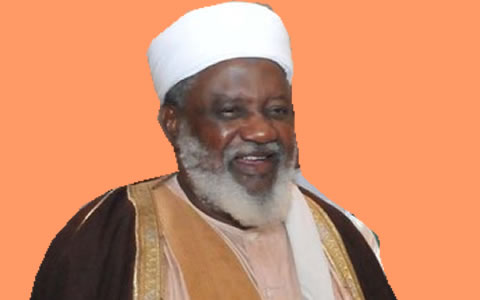 The death has been announced of the Chief Imam of the National Mosque, Abuja, Alhaji Musa Mohammed. He died Saturday evening after a brief illness.

The Muslim Rights Concern (MURIC) commiserates with the leader of all Nigerian Muslims, Alhaji Muhammad Saad Abubakar, the Sultan of Sokoto and President General of the Nigerian Supreme Council for Islamic Affairs (NSCIA). In like manner, we condole the entire Nigerian Muslim community and the Abuja Muslim jamaah whom the late Chief Imam had led and served most fervently during his lifetime.

Alhaji Musa Muhammed dedicated his whole life to the service of Almighty Allah. He was a great scholar of Islam who led a simple and ascetic life. His death will serve as a lesson to Nigerians on the need to shun materialism and to move closer to the Unseen Creator. His death will definitely leave a yawninglacuna particularly in Abuja Muslim community.

MURIC charges Nigerian Muslims to use the occasion of his death to forge greater unity in the Muslim Ummah and promote peaceful coexistence with non-Muslims.

We pray that Almighty Allah will forgive the late Chief Imam’s shortcomings and shower His mercy on him. We also pray that Allah gives his family the strength to bear the loss.