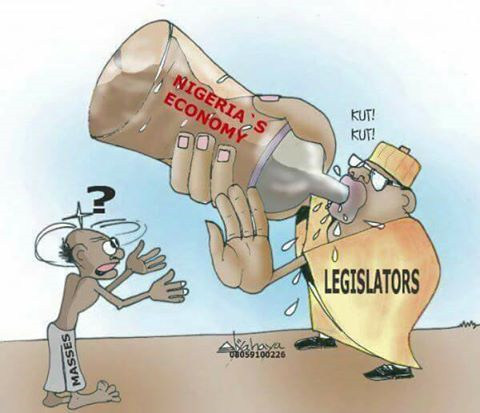 The dishonorable happenings in the 8th National Assembly have resolutely convinced politically-engaged Nigerians that a critical mass of politicians in the upper and lower chambers of our law making ivory tower are not there for representative democracy, but to earn the largest legislative allowances and wages in the history of democracy on earth.

From the melodrama produced by the Machiavellian process of picking principal officers in the lawmaking assemblage to the current Saraki saga, the drama seems to keep evolving unabatedly from the floors of the both house. Nigerians are finding it hard to move on with zest as expected by standard demands of citizenship because those they have elected to represent them at the National Assembly now advance their personal interest without recourse to their constituents.

Let’s face it, insensitive politicians, irrespective of party affiliations, love to spend funds on themselves irrespective of any opinion from the citizens they have been elected to serve. No doubt, democracy is expensive! But why should they spend so much to keep the wheels of governance spinning than on sustainable development?

How come solutions to poverty and unemployment at the grassroots are all about tricycles and sewing machines but N 3.8 Billion is spent on Sports Utility vehicles (SUV) for themselves?

Why do our public officers think that people at the grassroots should be the only ones to take the hit in the bumpy ride to economic reconstruction?

The answers would be that our public officials are not accountable to the public. The elected members even attempted to redefine what free speech should be in our democracy. Money and power always have a way of introducing a twist in noble human rectitude.

Why should they be held accountable in the first place? After all, as purportedly written by a sitting Senator, some of them ‘paid every inch of the way’ to get there. Therefore, they will never be afraid to happily and perceptively over promise but under deliver because there is no immediate penalty for doing so.

Perhaps, common sense should tell our Senators that ‘in the spirit of change’, the constant fleecing of public funds and display of contempt for public intelligence, which used to be a norm, is becoming a thing of the past in Nigeria. But then again, common sense has never been part of their equation.

The facetious response from a Senator to an individual she represents reconfirms two truisms about Nigerian politics: Truth has no place in our system and money wins elections. The system is so corrupt we can smell it in the air we breathe.

The APC led 8th National Assembly is failing the test for nobility, integrity and democratic know-how. How else can you describe the transmogrification of some elected officers from ‘agents of change’ to officials who subvert and discriminate against laws to mitigate corruption and wasting public funds, or a case where a member of the House of Assembly cretinously advised his colleagues to, impetuously ‘approve everything’ president Buhari sends to the floor of the house.

This attempt to turn the National Assembly into a marionette for the Executive arm of government is gawky.

I wonder why that ‘Honorable’ member delights in exposing his ignorance and making a mockery of himself with so much asininity. It looks like it costs someone a lot of money to win election.

The ‘sak’ hypothesis (Riding on Buhari’s goodwill to win elections) in the north indeed gave rise to the number of bozos with dinky understanding of separation of powers into the National Assembly.

That being said, we (the voters) gave them the munitions to use against us.

Despite wide denials, we vote for all sorts of things with religion, ethnicity, and regionalism playing cardinal roles. We pervert due processes in elections and transform it into supremacy contest by succumbing to a few people who believe they own the system and nation called Nigeria.

In exchange for bags of rice and salt, gallons of oil and few thousands of naira to last just for a day, we vote into offices perfidious people who will rob us of our voices and rights at the local level and interest at the national level.

Money and material considerations are part of politics in every democratic setting. But they have always taken away the voice and rights of the common man in Nigeria.

Even though most Nigerians have sold their rights to citizens’ participation, those of us who want change will get involved in making the change happen by keeping them on their toes.

It is obvious that appealing to our elected officials in the National Assembly might not change their dishonorable approach to public service since some of them have been bought or paid for by someone else at the party hierarchy. Nonetheless, we will continue to remind them that in representative democracy, they are not our leaders but our representatives. They are there to carry out the will of the people. In simple terms, their primary task is serving their) constituents.

In the past, whistles were used to nobly pass messages to our elected officials. But the prevalent circumstances in our House of Assembly have shown that our law makers have ear plugs in their ears. We are wiser and audacious now. We are engaging the use of drums and trumpets to articulate our disenchantment to democracy without citizens’ participation.