Wednesday evening, July 23rd, the Bring Back Our Girls New York division staged an electric 100 days vigil in front of the Nigerian Consulate, New York. It was a tearful event with touching speeches from the coordinators and attendees. As the occasion progressed a ‘minute of silence’ for positive thought and prayer was to be observed, just then this silent minute was paused as the Nigerian high commissioner suddenly appeared to grace the event. 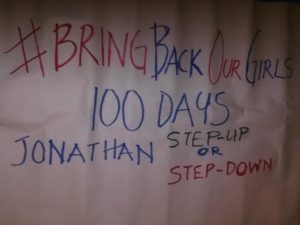 As his ‘highness’ had delivered a usual promise laden, bland address, he took on questions. He was asked what was being done and why it was taking so long to bring back the girls. The Minister responded that the Nigerian government had something up its sleeve which he could not reveal for security sensitivity. This was when Dr. Peregrino Brimah of ENDS could obviously not take it anymore. Carrying his banner which said, ‘Jonathan, step-up or step-down,’ he challenged the minister that ‘for how long must the girls endure, being raped in the jungle,’ further stating that the government should quit playing around and bring them back now, the girls are ‘as good as dead already.’ The Minister had interjected with the typical Nigerian government stale excuse that ‘they did not want to get the girls killed.’

Dr. Brimah further agitated that and how long does it take? That does the minister know that girls and guys have been abducted so for four years now? When will the government start to perform and deliver on its promise to secure its vulnerable citizenry? Dr. Brimah further charged that if the government could not do it, they should allow the ready civilians do so, and the hunters begging for government authorization to go rescue the girls.

At this point, the Bring Back Our Girls New York team was petting Dr. Brimah to calm down on the Minister. The Minister in anger marched off to Dr. Brimah’s jeers.

Another ministry official now took over on behalf of the minister, questioning Dr. Brimah as to why he was in America. Dr. Brimah retorted that his parents were legitimate civil servants who served the nation proud, unlike the current crop who made Nigeria barley habitable, a bomb and kidnap capital of the world.

With the expulsion of the Minister and his men, the ‘minute of silence,’ proceeded in peace and deep, sober reflection.

The organizers later coaxed Dr. Brimah on the need to swallow emotions and be diplomatic. Dr. Brimah acknowledged their advice, however stating that his patience in this matter expired not just 100 days ago, but four years ago since Boko Haram was left by the Jonathan administration to massacre farmers in the farming belt, and the government treated it with kid gloves, unlike their predecessor, serious Yar’Adua government.

*Craving your indulgence, I wrote my own article in the third person. May the dead in Kaduna at the bombing attempts on Gen. Buhari’s life and that of outspoken Boko Haram and Jonathan critic, Sheikh Dahiru Bauchi, be well with their Lord and may the Almighty give their families the fortitude to bear the loss. May God deliver Nigeria from the wickedness of politician created terror and may Psalm 109:6-15 bless those behind this terror.