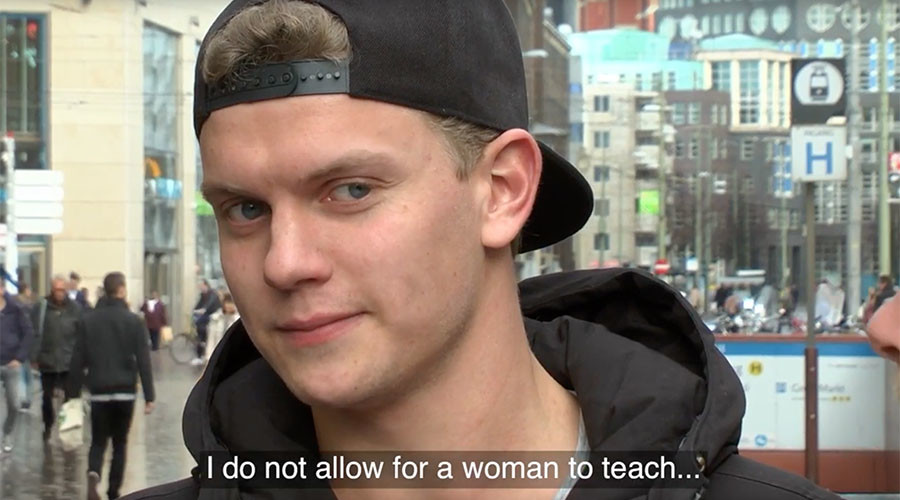 A Dutch duo came up with an interesting way to judge people’s prejudices in the Netherlands. They read passages from the Holy Bible which had been disguised as the Holy Koran to gauge people’s reactions, and found some interesting conclusions.

Call them pranksters, call them sociologists, but Alexander Spoor and Sacha Harland certainly knew how to provoke discussion by conducting what they called “The Holy Koran Experiment” on their YouTube channel Dit is Normaal (This is Normal).

“If two men sleep with each other they will both have to be killed,” from Leviticus 20:13 was read aloud to some startled passers-by who thought they were hearing verses from the Holy Koran, while in fact it was actually from the Holy Bible.

“The video is sort of a response to how the mainstream media has been covering all these attacks and the refugee crisis,”Spoor told RT.

“There is just a lot of media talking about how Islam is dangerous and the whole Paris thing did not help, and we knew if we conducted this experiment now, people would be more emotional about it,” he added.

“It’s an eye-opener for many people. We tell something that our mainstream media here doesn’t tell anyone,” Harland said.

The pair actually came up with the idea before the deadly November 13 attacks, and thought it would be interesting to carry out the social experiment with Muslims facing a backlash from sections of the general public following the terrorist attacks in Paris.

“People work in a certain way where they always want to point fingers to another group, which is guilty of what is happening to ‘your’ people and I think that Islam is a victim of this and an easy target,” Harland told RT.

Harland and Spoor’s Dit is Normal [This is Normal] YouTube channel has gained over two-and-a-half million views on the social media platform.

They decided to take a sample of around 20 people and found the majority they asked to be tolerant. However, they admitted that the results could have been different had the survey been carried out in a different neighborhood, rather than in the city center.

Not everyone has approved of what the pair have been doing. Facebook removed a link to their video, while Reddit removed the video from its site, where it was in the politics section and was trending in the top three, the pair said.

Harland and Spoor also said they have received offers via Facebook to conduct the experiment in other countries – something they are considering.

“A lot of people, it feels, are trying to have a discussion with us about a video that we didn’t really make, with the intentions they think we made it with,” Spoor said.

“So it says more about the people than our video or us. We just wanted to make an eye-opening video and make a platform for discussion,” he concluded.