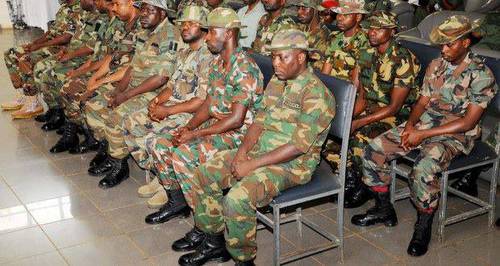 54 Nigerian soldiers were sentenced to death in December 2014 for refusing to fight Boko Haram insurgents unless they were given adequate equipment. The soldiers had on August 4, in Maiduguri, refused to join the 111 Special Forces Battalion troops, commanded by Lieutenant Colonel Timothy Opurum, for an operation against extremist group, Boko Haram. The operation was meant to recapture Delwa, Bulabulin and Damboa in Borno State from the insurgents.

The Muslim Rights Concern (MURIC) deems it necessary for the Federal Government (FG) to pardon the soldiers who are currently on death row in view of fresh facts emerging from the celebrated cases of diversion of funds meant for the procurement of arms for Nigerian soldiers fighting Boko Haram.

It will be recalled that former National Security Adviser Col. Dasuki (rtd) and some Nigerian politicians are currently facing charges of fraudulent diversion of the sum of $2.1 billion meant for the purchase of weapons and equipment for the Nigerian military.

We remind FG that the 54 soldiers had been participating in the war against the insurgents until they discovered that Nigerian soldiers were not receiving weapons meant for prosecuting the war. They had fought gallantly for their country until they realized that highly placed traitors were robbing Nigeria blind by diverting funds meant for the purchase of arms. They saw that Nigerian soldiers were being made sacrificial lambs and forced to go on suicidal raids by politicians who were lining their pockets with blood money.

We call FG’s attention to the fact that all the accused soldiers pleaded not guilty to the charges, and argued that they were prepared to fight but had insufficient equipment. It is only an irresponsible parent who sends children to school without books and writing materials. Farmers do not go to their farms without hoes and cutlasses. It is therefore the superiors of the 54 soldiers who have questions to answer.

MURIC asserts that the 54 soldiers engaged in an extremely patriotic act by protesting and refusing to fight without adequate weapons in order to expose the dirty deals in the battle against insurgents.
In fact, had the 54 soldiers not embarked on the protest, Nigerians would have remained oblivious of the true picture, the massive killing of Nigerian troops by the insurgents would have continued unabated and the whole North East, nay, the entire Northern Nigeria would have been run over by Boko Haram in a matter of months.

Instead of killing the 54 soldiers on death row, therefore, they should be garlanded as heroes and decorated with medals. We consider these men as whistleblowers. They are gallant soldiers and patriots sadly mistaken for cowards.

The order to march forward and fight Boko Haram with bare hands was improper command and the 54 soldiers refused to obey in national interest. We call on FG to let the condemned soldiers live. They are the gem in the collection. Killing them will be a miscarriage of justice. We therefore appeal to FG not only to pardon them but to reinstate them in the armed forces.

The real traitors are those politicians who diverted funds meant for the procurement of arms. They should be rounded up, tried and severely punished. That money is blood money. Its diversion made it possible for hundreds of Nigerian soldiers to fall on the battle field. It caused the killing and maiming of innocent Nigerians in the North East. The looters facilitated the bombing of churches, mosques and motor parks. The hands of these corrupt politicians are soaked in blood and they must pay for it.

In conclusion, we call on the Federal Government to pardon the condemned soldiers and vigorously prosecute those behind the diversion of arms funds. We appeal to the National Assembly to wade into the matter. We also urge civil society not to forget these gallant but unlucky soldiers on death row.