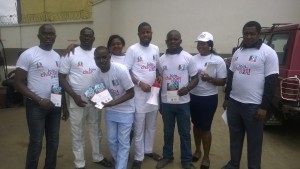 The group which consist of professionals in various walks of life and entrepreneurs stormed the popular Mushin/Ojuwoye Market to sensitize the market women and commercial bus drivers on need to maintain a clean and healthy environment.

Mr Mohammed Brimah, the State Coordinator of the group, while speaking with press men mentioned that the awareness campaign was in collaboration with the State’s Youth Leader, Omotayo Sanyaolu, who is also a member of the group.

He said: “The Ebola awareness campaign is one of our numerous initiatives which the group aims to take to all Local Governments in the state. Lagos APYF is not only about politics, we are also committed to rid the society off any disease that may pose as threat to the health of the society.”

Corroborating his words, Omotayo, charged Lagos youths to be alive to responsibilities and be the change they desire to witness.

In his words: “The government cannot do it alone. It is a known fact the Lagos State Governor, Babatunde Fashola has contained the disease in the state. It is with this we are also contributing our effort by giving out sanitizers to the market women and commercial bus drivers to ensure they all live a clean and healthy life.”

“We do not only preach the word, we act it. It is for us as progressives to take part in cleansing the nation off the virus. We as a group decided we should spread the word by giving out sanitizers and educating the masses on the disease.”

National Liaison Officer of the group, Bisola Ogungbemi, urged all youths to be agent of change in their respective communities. She said further that irrespective of party affiliation, the interest of the nation should be their number one priority.

Members of the group, most especially those working in the health sector also took turns to address the marketers and commuters on the symptoms of Ebola, preventive measures, use of sanitizers and most importantly to immediately report any case of suspected victims to the appropriate health authorities rather than hide them indoors as this may lead to the spread of the deadly disease.